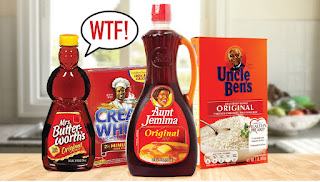 As brands continue scrambling to erase “controversial” characters from packages and promotions, it appears at least one cuddly critter is causing lots of head-scratching: Mrs. Butterworth. After all, Mrs. Butterworth’s background has never been officially confirmed. Even the manufacturer—Conagra Brands—insists the bottle design and persona are “intended to evoke the images of a loving grandmother,” seemingly void of race or ethnicity.

The Columbia Daily Tribune once reported, “Thelma ‘Butterfly’ McQueen—best known for playing the young mammy ‘Prissy’ in ‘Gone with the Wind’—was the black actress who modeled for the original Mrs. Butterworth syrup bottle.” Yet MultiCultClassics could find no other sources to fully corroborate the alleged factoid.

There appears to be no historical evidence showing Mrs. Butterworth in culturally clueless campaigns, clearly contrasting Aunt Jemima, Uncle Ben and Rastus. Could Mrs. Butterworth be the pancake syrup equivalent of a wigger—a Caucasian grandma biting Aunt Jemima’s style? Is she as anti-racist as her dancing partner—KFC’s Colonel Sanders—who has also apparently been falsely accused of racism?

Add another venerable brand to the list of companies under review.

After decisions by Aunt Jemima and Uncle Ben’s to overhaul their imaging in the wake of renewed calls for racial equality, Conagra Brands announced Wednesday it has “begun a complete brand and packaging review on Mrs. Butterworth’s.”

Though there have been debates over Mrs. Butterworth’s race, some have associated the shape of the brand’s syrup bottles with the offensive “Mammy” racial caricature of stereotype for Black women.

“The Mrs. Butterworth’s brand, including its syrup packaging, is intended to evoke the images of a loving grandmother,” Conagra Brands said in a statement Wednesday. “We stand in solidarity with our Black and Brown communities and we can see that our packaging may be interpreted in a way that is wholly inconsistent with our values.”

Pancake syrup company Aunt Jemima, owned by Quaker Oats, said Wednesday that it would retire Aunt Jemima from packaging on its brand of syrup and pancake mixes because it’s “based on a racial stereotype.” It acknowledged that its prior work to update the character was “not enough.”

Mars-owned Uncle Ben’s said it plans to change its rice but said in a news release that it didn’t know “what the exact changes or timing will be, but we are evaluating all possibilities.”