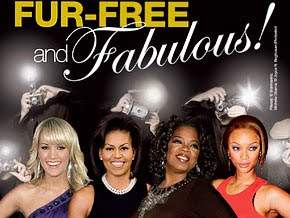 Taking shots in a MultiCultClassics Monologue…

• The White House is irked over the latest ad from PETA featuring First Lady Michelle Obama. Of course, PETA officials responded in typical clueless fashion. The organization’s president said, “The fact is that Michelle Obama has issued a statement indicating that she doesn’t wear fur, and the world should know that in PETA’s eyes, that makes her pretty fabulous.” The fact that PETA uses celebrities in their messages without permission makes them pretty asinine. Cheap too.

• NBA Commissioner David Stern indefinitely suspended Washington Wizards star Gilbert Arenas after the player allegedly brandished pistols in the team’s locker room. Stern announced, “[Arenas] is not currently fit to take the court in an NBA game.” But he does bring new meaning to the role of shooting guard.

• The Chicago Transit Authority is facing a federal lawsuit for making service cuts that allegedly discriminate against minorities. “Rosa Parks and Martin Luther King Jr. came to prominence more than 60 years ago when minorities in Montgomery were being denied a seat on the bus,” said U.S. Rep. Jesse Jackson Jr. “Half a century later, it appears that minorities in Chicago are subsidizing all transit riders, yet still not getting their seat on the bus.” Has Jackson been on a CTA bus lately? Most riders don’t want to take a seat for fear of sitting on gum or other nasty substances.
Posted by HighJive at 10:58 AM