7477: Chris Matthews Forgot He Was Clueless. 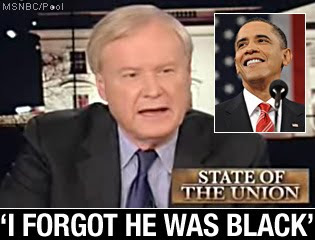 Chris Matthews on Obama State of the Union address: ‘I forgot he was black’

Loose-lipped MSNBC talking head Chris Matthews has unleashed a flood of Internet chatter with the odd remark he “forgot he [Obama] was black.”

Analyzing Obama’s State of the Union address, he called the President “post-racial” before saying, “I forgot he was black tonight for an hour. He’s gone a long way to become a leader of this country and past so much history in just a year or two. I mean it’s something we don’t even think about.

In an appearance later in the evening on MSNBC with Rachel Maddow, Matthews attempted to clarify his earlier comments.

He was trying to say Obama’s leadership has shattered a black-white divide in American politics, he told Maddow, calling his feelings upon hearing Obama’s speech an “epiphany.”

This isn’t the first time Matthews has made an unusual remark that set tongues wagging. Covering the Potomac primaries for MSNBC, Matthews said he “felt this thrill going up my leg” listening to Obama speak.
Posted by HighJive at 12:40 PM