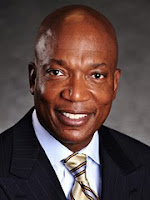 Mr. Jackson, who was onetime GM marketing chief, will serve as senior VP-global sales and distribution for the Santa Monica, Calif.-based electric car and battery manufacturer. In August, Coda named Kerri Martin, who had been a marketing executive at BMW’s Mini and Volkswagen, as its first chief marketing officer.

Kevin Czinger, president-CEO, Coda Automotive, in a statement said the company was looking for an executive with the “right mix of business acumen, innovative thinking and willingness to take a fresh look at the automotive sales model.”

Mr. Jackson joined GM in 2000 as executive director-sales and marketing support in Detroit. He later moved to California in 2002 to head the automaker’s western region. He has also held sales and marketing positions at Coca-Cola, PepsiCo and Coors Brewing.

A Coda spokeswoman said Mr. Jackson is not yet authorized to speak on behalf of the company. He officially starts next week.
Posted by HighJive at 9:52 PM