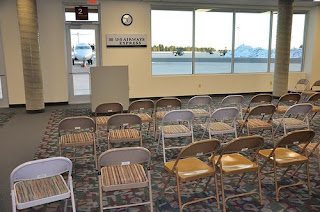 Weekend news in a MultiCultClassics Monologue…

• The NAACP is suing US Airways for allegedly discriminating against Black airport employees in Philadelphia. The suit charges Black employees were assigned to less desirable gates, which airline employees referred to with racially-loaded nicknames like “Compton” and “The Ghetto.” A company official responded, “We take discrimination very seriously. We have a very strong commitment to diversity and to nondiscrimination.” Look for a new US Airways diversity ad to appear in minority publications soon.

• KFC is facing another problem, this time from a coalition of franchisees who are suing the company for shifting its emphasis from fried to grilled chicken. Parent company Yum responded to the legal move by declaring, “Yum Brands fully expects to win the suit and minimize the waste of time and money spent on it so that we can continue to satisfy our customers and grow the business.” Especially among Asian Americans and Blacks all around the world.

• Glenn Beck is now catching heat for ridiculing the term African-American. On a recent radio broadcast, Beck declared that “African-American is a bogus, PC, made-up term. That is not a race. Your ancestry is from Africa, and now you live in America. Okay, so you were brought over, either your family was brought over in the slave trade, or you were born here and your family immigrated here, or whatever. But that is not a race.” Rev. Al Sharpton said Beck’s remarks were “insulting and offensive and belittling.” Sharpton explained the term “was developed by African-Americans, not some PC outside group. That was a self-defined expression that we have developed after the other terms that we did not agree with, like colored and Negro, had been imposed upon us.” Rev. Jesse Jackson added, “People have a right to a choice of their own designation. We expect people who respect us to respect our choice.”

• UPS is scheduled to dump 1,800 jobs. No word if employees’ belongings will be shipped home via UPS.
Posted by HighJive at 9:00 AM