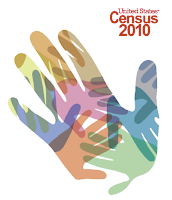 There’s been a lot of hoopla surrounding advertising for the 2010 U.S. Census, as a significant portion of the overall budget is being allocated to minority agencies and media. The financial distributions—as well as the corny logo depicted above—seem to signal that the U.S. Census Bureau recognizes of the changing face of our nation.

So it’s a little peculiar to see the initial campaign, which is almost monocultural in its execution. From casting to tonality, the shit looks and feels extraordinarily White. Even Advertising Age critic Bob Garfield noted the exclusivity by saying, “What a weird choice to build the ongoing awareness campaign around a troupe of well-heeled, middle-aged white people who are famous mainly to well-heeled middle-aged white people. Hmm.”

The campaign’s creator is none other than Draftfcb, a consistently culturally clueless enterprise. This is the agency whose President-CEO pontificates on diversity. Additionally, the Chief Diversity Officer of parent company IPG recently remarked, “Homogeneous creative teams limit the number of idea combinations. … They can also come up with some embarrassing creative.” Well, the U.S. Census campaign is another shining example to dramatize the point.
Posted by HighJive at 5:32 PM