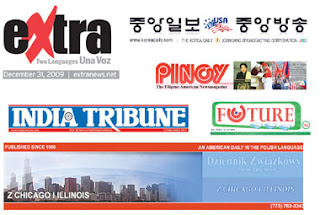 From The Chicago Reader…

In these trying times for mainstream media, which Chicago journalists have the most to say to one another but are least likely to say it? My nominees would be the publishers of the region’s ethnic press. Most run shoestring operations, serving readers of modest means who share a common experience as strangers in a strange land yet are divided by such profound partitions as religion, history, neighborhood, and language.

If you’d told me a few days ago that six ethnic papers would run long stories this week on the upcoming federal census, I’d have assumed it was an interesting coincidence—one reflecting the apprehension felt by all newcomers when government comes around asking questions.

But coincidence doesn’t explain the six stories—idealism does. The stories were all written by undergrads at Northwestern’s Medill journalism school taking a class called “Connecting with Immigrants and Multi-ethnic Communities.” The six papers were brought together by Jack Doppelt, the professor teaching the class, and Steve Franklin, a former Tribune reporter who spent two years in the Peace Corps in Turkey before joining the paper and after leaving it taught journalism in Egypt.

Supported by a Carnegie Foundation grant, Doppelt’s class was created a year ago on the premise that “much of urban journalism is falling apart [and] we must find novel ways to tell stories.” Working out of Columbia College’s Community Media Workshop, Franklin has dedicated himself to helping the local ethnic media survive and grow. The two of them came up with the idea of an “ethnic media summit.”

It was held last October 27 in Doppelt’s classroom. Journalists from half a dozen papers and one independent Web site met not only Doppelt’s 11 students but one another. Until that meeting, “I wasn’t aware that there was a Korean publication in Chicago,” says Silvana Tabares, managing editor of the bilingual Latino weekly Extra.

Franklin and Doppelt’s idea was to divvy the students up among the six papers and have them write stories sharing a common theme. Health care was one they kicked around, foreclosures another. But immigration was the compelling experience everyone’s readers shared, and when the journalists looked for a more specific focus, they landed on the census.

From the six papers:

Jessica Abels, Raphaelle Neyton, and Shasha Zou in al Moustaqbil (“The Future”): “When Arab Americans fill out their census forms in just a few months, they won’t find an Arab category listed next to Asian, Black or African American, or White. ‘Arab is not considered a race, so there’s no racial category,’ explains Louise Cainkar, a board member of the Arab American Action Network. ‘They have to check the white box, and a lot of people feel that their experience is not the white experience, so that’s unfair.’”

Kate Endeley and Clara Lingle in the Korea Central Daily News: “Han and Kim cite many reasons why Koreans who are not U.S. citizens opt out of participating: they are undocumented and therefore fear the legal repercussions; they struggle with English (the 2000 census forms did not come in a Korean version); they find the participation process too tedious or they are unaware of the census itself.”

Zoe Jennings in Pinoy: “Many Filipinos may not understand the importance of the count because in the Philippines, there is no census equivalent and they had never been counted. In providing the government with their name and family information, Clarito says, many Filipinos fear that the government is keeping tabs on them, or at the very least, will demand they perform jury duty or another civic duty.”

Jessica Allen in the India Tribune: “Kamaria said many people don’t know why the census matters, and that in general it needs to be better explained. Even she expressed uncertainty about how the census would affect illegal immigrants who choose to fill out the forms and whether illegal immigrants or students are even supposed to fill it out.”

Arianna Hermosillo and Nadine Shabeeb in the Polish Daily News: “Another barrier to filling out the census form is that people may not even recognize it when it arrives in the mail, according to Zajaczowska. ‘We will have to teach them that the Census 2010 means “Spis Powszechny,”’ Zajaczowska said. This literally translates to ‘common list’ which is what the census is called in Poland.”

Franklin and Doppelt say the papers participated enthusiastically, and I wondered why. They were committing themselves to running major stories on their communities by ethnic outsiders who were moreover still learning the craft of journalism. And the stories would be written in English, meaning that in some cases they would have to be translated. (Pinoy and the India Tribune publish in English, Extra in English and Spanish.)

“In the best of all worlds,” Franklin allowed, the stories on the census would have been staff written. “But most of these papers are very small-staffed. We gave them an extra boost. … And for the students it was an eye-opening experience.”

Read the full story here.
Posted by HighJive at 12:29 AM