7465: Republicans And The Black Vote. 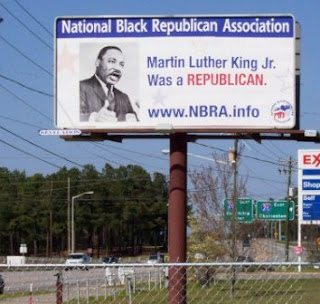 How Republicans can win black voters

If the Republicans think they are simply “due” to start winning elections, perhaps buoyed by the recent polls showing that the public is turning against Democrats in general and the Obama administration in particular, then they may neglect to do the things they need to do if they are to turn their hopes into realities.

One of the things that is long overdue is some Republican re-thinking—or perhaps thinking for the first time—about the approach that they have been using, with consistently disastrous results, for trying to get the black vote.

The black vote was once consistently Republican, from the time of Abraham Lincoln to Herbert Hoover. Even after Franklin D. Roosevelt won over the black vote to the Democrats, it was not considered remarkable when Eisenhower got a higher share of the black vote than any Republican president in recent times has.

In some close congressional elections, if the Republicans increase their share of the black vote by even modest amounts, that will be the difference between victory and defeat.

They want their children to get a decent education, which they are unlikely to get so long as public schools are a monopoly run for the benefit of the teachers unions, instead of for the education of the children. Democrats are totally in hock to the teachers unions, which means that Republicans have a golden opportunity to go after the votes of black parents by connecting the dots and exposing one of the key reasons for bad education in inner cities and the bad consequences that follow.

But when have you ever heard a Republican candidate get up and hammer the teachers unions for blocking every attempt to give parents—black or white—the choice of where to send their children?

The teachers unions are going to be against the Republicans, whether Republicans hammer them or keep timidly quiet. Why not talk straight with black voters about the dire consequences of the public school monopoly that the teachers unions and the Democrats protect at all costs, even though many private and public-charter schools—notably the Knowledge is Power Program schools in various states—have achieved remarkable success with low-income and minority youngsters?

Blacks have been lied to so much that straight talk can gain their respect, even if they don’t agree with everything you say. Republicans need all the credibility they can get. When they try to be imitation Democrats, all they do is forfeit credibility.

Most blacks don’t want judges who turn criminals loose in their communities to plague them and their children. These are almost invariably liberal judges, appointed mostly by Democrats.

Many of the key constituencies of the Democratic party—the teachers unions, the trial lawyers and the environmentalists, for example—have agendas with the net effect of inflicting damage on blacks. Urban renewal destroys mostly minority neighborhoods, and environmentalist restrictions on home-building send housing prices skyrocketing, forcing blacks out of many communities. The number of blacks in San Francisco has been cut in half since 1970.

But unless Republicans connect the dots and lay out the facts in plain English, these facts will be like the tree that fell in an empty forest without being heard.
Posted by HighJive at 8:33 AM

This article started off well enough, then took a nose dive into Failland.