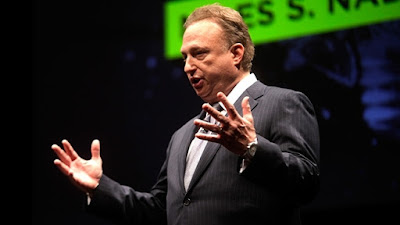 Adweek reported former MDC Partners CEO Miles Nadal will now repay the holding company $21 million following an SEC investigation. Not sure, but it could be the largest influx of money the White holding company has enjoyed in years. To put things in perspective, MDC employees would have to steal roughly 21 million legal pads from the office supplies closet to match Nadal’s theft. Additionally, the “refund” is approximately $21 million more than the average MDC employee receives as severance when getting terminated by an agency within the network. Thanks to Nadal, MDC now stands for Multi-Million Dollar Criminal.

MDC Founder Miles Nadal Is Paying the Company Back $21 Million

Former MDC Partners chief Miles Nadal has already paid the company back $8.6 million and owes an additional $12.7 million in the wake of the SEC inquiry into his expenses, company CFO David Doft told financial analysts on MDC’s second-quarter earnings call.

Last month, Nadal quit the company he founded amid the continuing investigation.

Doft, along with new CEO Scott Kauffman, reassured Wall Street the continuing inquiry has not cost MDC agency affiliates any business or caused problems with talent recruitment or retention. Still, Kauffman ended the analysts’ call by emphasizing the company’s need to “regain your trust.”

Kauffman said MDC just completed a deal to purchase the 49 percent of 72andSunny it doesn’t already own, with the agency’s three principals pledging to stay on another five years.

MDC also disclosed it has spent $3.9 million in legal fees related to the SEC investigation of Nadal, but the company hopes to recoup some of it under its insurance policy. Kauffman and Doft said company execs continue to cooperate with the SEC inquiry.

Kauffman, a nine-year MDC board member, made his Wall Street debut by promising no change in MDC’s core strategy of making entrepreneurial acquisitions by initially buying less than 100 percent in agency affiliates. He also said MDC will continue to bolster its North America holdings, scale media operations and look at expansion outside North America, where international operations now generate 9 percent of revenue.

In the second quarter, MDC reported a 7.8 percent rise in organic revenue and an increase of 11.3 percent in overall revenue. The company reported an “expected” loss of $2.5 million compared with income of $7.6 million in the 2014 period, blaming revenue recognition on certain accounts. MDC affirmed full-year revenue growth of between 6.5 percent and 8.5 percent to about $1.3 billion.

Let's see. MDC has always been the ONE holdout advertising agency holding company without any kind of diversity discussion, or initiative, or interest in it at all (not that any of their holding agency colleagues are doing any better, but at least there's some lip service being paid).

So MDC is the ONE company with no system of checks or balances to let in outside voices or diverse POVs. None, zip, zilch.

This is precisely why the NYC Comptroller (you listening @scottmstringer ? And the @NYCCHR #NYCCHR ? ) is justified… no, NEEDS… to demand that the holding companies account, with actual honest to god numbers and not empty promises, for the diversity in their ranks or the lack of it.

A hell of a lot of workers are going to lose their jobs now, millions of dollars just poured down the tubes and yeah, pension funds flushed down the toilet because no one was paying attention to the lack of diversity in yet another nepotistic, incestuous holding company.

There’s your economic justification for diversifying the ad agency (well, if you have the slightest interest in the $$$ side of it anyway).