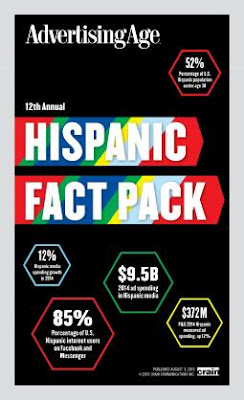 Advertising Age published its 2015 Hispanic Fact Pack; however, the “facts” are debatable.

Hispanic Fact Pack Fact: Rivalries are heating up. In two of the biggest recent account moves, Sprint is moving to Omnicom Group-controlled Alma after a Hispanic pitch and AT&T, the No. 2 spender, is now at Omnicom’s Dieste after leaving its previous agency, WPP’s Bravo Group. Reality Check Fact: The true rivalries are happening between White holding companies, and the Latino shops are treated like puppets, peons and piñatas.

Hispanic Fact Pack Fact: In the 50 largest U.S. Hispanic agencies’ ranking, Lopez Negrete Communications’ 26.3% revenue growth to $42.3 million moved the independent agency into the top slot from No. 2 after a steady climb over the past decade from No. 7 in the 2005 Hispanic Fact Pack. Reality Check Fact: The top Latino shop records revenue at $42.3 million, while the top White advertising agency—BBDO—records revenue at $552 million. ‘Nuff said.

Hispanic Fact Pack Fact: Hispanics continue to account for nearly half of the U.S. population growth since the 2010 Census, and now account for 17.4% of the population, or 55.4 million people. Reality Check Fact: Latinos account for roughly 9.25% of the U.S. advertising industry population. But even that figure is questionable, as White holding companies refuse to disclose EEO-1 data to compare against the U.S. Census data—plus, any EEO-1 data would probably be inflated by hires from Brazil, Spain and custodial services.

White agencies don't want to hire anyone from Hispanic ad agencies in the US, they only want to hire Brazilians and Spaniards and foreigners.

White clients don't or can't tell the difference or don't care. To save money they moved all their money for Hispanic advertising to Total Market. So now big white agencies with their all white teams do all the work, and a rent-a-Spaniard or rent-a-translator steps in at the last minute to add some Spanish text, or a couple of dark haired white people (but never any afrolatin@s, god forbid) to the photo shoot, and call it a day.

The collateral damage is hundreds of actual Latin@s in the US nationwide who saw their jobs disappear, and are getting laughed out of white ad agencies. Ask everyone from Bromley looking for a job.

Why is this a big deal? Because there are hardly any Latin@s in white ad agencies to begin with. The only significant number not working recepcionist and janitorial jobs, and yes the white agencies are counting those as diversity hires, are in the Hispanic agencies.

Correction, WERE in the Hispanic agencies.

Jesus christ. 46 foreign H1B workers at a single Hispanic ad agency? How is this not news in AdAge or adweek? That is not normal.

There is like 200 foreign visas in just the first few agencies in that AdAge report! Is this why they are OK with black canibal ads, no one can tell that is wrong in America?

If there aren’t enough Hispanics to hire them from the US, and there are no Hispanics in general market ad agencies, then where the hella re they?