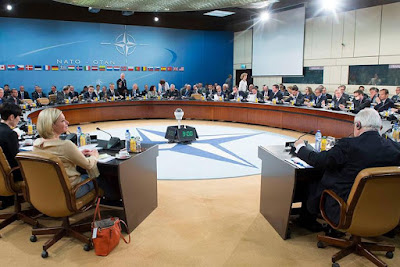 Campaign reported NATO hired a White advertising agency and White PR firm to handle communications work across its 28 member states. Leave it to an organization comprised of members from predominately White countries to select partners where exclusivity is the norm. Oddly enough, the careers section on NATO’s website states:

NATO has a lot to offer you in multicultural work, subject-matter expertise and exposure to decision-making at the highest level of the political-military dialogue. We recruit professionals who demonstrate our core values of integrity, impartiality, loyalty, accountability and professionalism.

Apparently, “multicultural work” does not mean anything related to race and ethnicity. According to its website, “NATO’s essential purpose is to safeguard the freedom and security of its members through political and military means.” But don’t expect NATO to join the army to advance diversity in adland.

Nato, the inter-governmental military alliance, has appointed Engine and Agenda to handle all its communications requirements across its 28 member states.

The two agencies have signed a five-year agreement with Nato (the North Atlantic Treaty Organisation) following a competitive pitch.

Simon Peck, the group managing director of Engine UK, said: “We are excited to be working with such an illustrious and important institution, as it tackles some of the most fascinating challenges of our time.”

“This is a huge win for our team,” said Agenda founding partner Doug Turner. “This was a long and highly competitive process and we are honored to have the chance to do important work for such a storied institution, and equally pleased to be partnered with Engine on this effort.”

He added: “There is no greater challenge – and reward – than helping the Alliance deal with a new generation of security threats.”

Nato is headquartered in Brussels and was founded in 1949.

In the past, Nato has used M&C Saatchi to advise on its communications for its Allied Rapid Reaction Corps.

Only white agencies can afford to participate in the long, expensive process to be an agency of record.

If you put five of the biggest minority agencies in teh US together, you still wouldn't scratch the surface of the costs and manpower necessary to participate in these searches.

Even when there are fees paid to the agencies taking part, it's nominal in the grand scheme of things. An agency still has to lay out tens to hundreds of thousands of dollars on top of that to really deliver.

How many ethnic agencies have an extra $100k in their pockets they can piss into the wind, just to participate in a contest that favors their richer white competitors from the start?

They pooled their resources. Both winning agencies are part of enormous multinational collectives headquartered out of the UK.