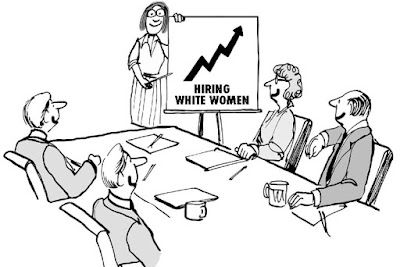 Campaign published yet another cry for gender equality from a whining White woman, this one titled, “My advice for young female creatives going into advertising.” It takes extraordinary self-absorption and cultural cluelessness to protest discrimination when you’re an active member of the Caucasian class creating the exclusivity. The best advice not included in the pathetic perspective? Stop bitching.

My advice for young female creatives going into advertising

What advice would you give to young female creatives about to enter the advertising industry? Lisa Blythman-Wood, VML London’s associate creative director, who heads the agency’s involvement in the D&AD New Blood initiative, offers her opinion.

Graduate season is upon us. What that means for the industry is a new intake of fresh-faced, eager young creatives who are (hopefully) bursting with ideas, ready to work late and up for a challenge.

For graduates, this September will see you stepping onto the first rung of your career ladder, which you can expect to steadily climb over the next few years, being fairly recognised for your work and properly rewarded for your efforts.

Unless, of course, you’re a woman.

Obviously not every woman who enters our industry will come up against sexism or gender discrimination in their first few jobs, but a hell of a lot will.

The poor ratio of male to female creative directors in the industry right now is hard to ignore and day to day sexism has a lot to do with it.

For many women experiencing this for the first time, their initial reaction will be disbelief — especially when they have just come out of an education system where men and women are treated, tested and sent out into the world on an equal footing.

Here’s some advice to get past the day to day gender issues and discrimination to make sure you don’t thrown off your career path as you’re starting out.

Out and out sexism

Gender discrimination can be blatantly obvious, or it can be so ingrained in a culture that it is part of everyday conversation. You could see male colleagues favoured over female ones, hear casual sexist remarks made in the office or about people you know, or discover a very real gender pay gap in the agency.

Either way, if you think it’s an issue that’s affecting your life at work then you need to raise it.

The trick is to have the confidence to recognise it and tackle it head-on in a way that feels safe. If you don’t feel like you can talk to your line manager about it, then either go to a senior member of staff who you feel you have a good relationship with and who will be able to professionally advise you — this is really important, you do not want to look like you’re trying to slag someone off — or just make a beeline for HR.

And don’t forget that with the way the industry is now, you will unfortunately be dealing with sexism in the workplace for a large part your career, so the earlier you find a way to deal with it the better.

She said jokingly to Campaign that she “might call him back and say I need some arsehole in our department,” but she still had to deal with it in the first place.

It will become painfully obvious fairly early on that there are more senior male creatives than there are female ones. This isn’t going to change until more entry-level women stay in the industry and keep climbing until they get to the top — and everyone needs help and advice with this along the way.

It doesn’t matter what gender your mentor is, it just matters that they give you the help and advice that you need to help you along when you come up against challenges affecting your work or career progression.

Remember that statistic quoted in Lean In? That in an internal report conducted by Hewlett Packard, men apply for a job when they meet only 60 per cent of qualifications, but women will only apply if they meet 100 per cent of them?

Sometimes you just need someone in your profession with a lot of experience who knows your work and what you’re capable of to say: “You could do that standing on your head, why wouldn’t you think of applying just because you don’t meet every single requirement?”

You could do the best work of your life, work the longest hours you’ve ever done in a job and give up your weekends to campaigns too, but that doesn’t mean you’ll necessarily get recognised for it or remunerated accordingly.

Data released by Bloomberg Businessweek last year showed that 17 out of 22 industries hiring MBA graduates in the US paid women less than men from the outset, despite starting at the same level, which means those female graduates were already starting the career ladder — financially — on a lower footing, despite being equally qualified.

So don’t expect your employer to see all your hard work and just give you the money you deserve. Use your performance and pay reviews to tell your superiors what you have achieved, why you’re proud of your work, and how you successfully overcame the challenges facing you to get the results you did to prove why you deserve a promotion or pay rise.

Lisa Blythman-Wood is the associate creative director at VML London, which is a mentor agency for the D&AD New Blood initiative

As long as there's no accountability and no one asks for numbers, the advertising world is going to continue on as it has always done, which is saving the best jobs for white friends of white people already in decision making roles of power.

They'll just keep releasing infographics that show the difference of men vs. women hiring in ad agencies, and use THAT as proof of progress or lack thereof, never ever reveal that it may be 30% women vs. 70% men, but it's 1% black vs. 99% white.

So they need to be held accountable and SHOW NUMBERS beyond white women vs. white men numbers.