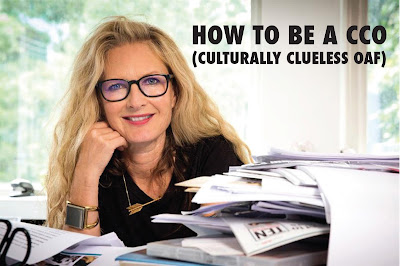 The world is very different from when I started out as a creative. I was part of an all-female team, and remember being turned away from agencies because “we’ve already got one of you” — meaning a woman — or even two in the creative department. At Gold Greenlees Trott, I was one of only three women the whole time I worked there.

Stanners’ observations underscore the bullshit behind the alleged dearth of dames in adland. She admits “we are getting there” with gender equality, yet makes zero mention regarding the ratio of racial and ethnic minorities at Saatchi & Saatchi. She believes “it’s important, because women bring a different perspective and you need a creative department full of diverse individuals,” but she fails to consider how non-Whites might be included in the equation.

If you really want to learn how to be a chief creative officer, begin by embracing the cultural cluelessness and self-absorbed character defects displayed by White people like Stanners.

You would think that a class of women who had experience being turned away from jobs because there was "already one of them in an agency", and the agency found that to be enough diversity, would have some compassion or understanding of what minorities go through in the industry.

Instead, it's as if they've blocked out their struggles completely, turned a blind eye, and hyper focused instead on perceived injustices to women only, which is code and default for white women only.

Where are 40+ black diversity officers at various General Market agencies assigned to increasing minority diversity? Where are all the minorities that sit on boards and committees at all these diversity initiatives? They need to start looking out for their own. Stop expecting white people to address your concerns. Your people have to help your people. Black people in this industry need to work together. Start Raising hell! Call out Creative Directors, ECDs or setup job fairs or run open houses at various agencies that need diversity. Stop expecting people to do for you, what you have never done for yourself.

So it seems to the outside world like each agency has a warm body committed to diversity, but it's actually just a part-timer doing the bare minimum at a bunch of agencies.

These usually black and sometimes Asian diversity officers show up at the occasional agency for brown bag lunches to talk about diversity (but do nothing about it), to man a table at diversity recruitment events (but hire no one), to coordinate diversity matchmaker sessions (to again hire no vendors), and to write sections of annual reports heralding the enormous diversity efforts of the ad agency (which is just the go-nowhere results of all of the above).

Expecting or demanding anything more from them is naive.