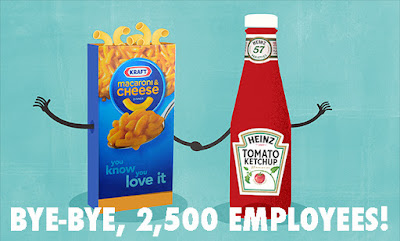 Advertising Age reported Kraft Heinz will dump 2,500 employees across the U.S. and Canada. The place that rejects up to 85 percent of digital advertising—despite proclaiming not all digital advertising is crap—is rejecting lots of employees and treating them like crap. Maybe Kraft figured it could realize better ROI with content than company people.

Kraft Heinz Co. said Wednesday it will eliminate about 2,500 jobs across the U.S. and Canada, or more than 5 percent of its total workforce.

Massive cuts at the maker of Kraft macaroni and cheese and Heinz ketchup had been rumored since the merger was completed in early July.

Before Wednesday’s cuts, Kraft Heinz had about 46,000 employees overall. The announcement includes slashing about 700 jobs at Kraft’s headquarters.

Heinz already eliminated thousands of jobs soon after it was acquired by 3G and Berkshire Hathaway.

“We have developed a new streamlined structure for our organization to simplify, strengthen and leverage the company’s scale,” spokesman Michael Mullen said in a statement. “This new structure eliminates duplication to enable faster decision making, increased accountability and accelerated growth.”

It was not immediately clear which areas were affected by the cuts and Mr. Mullen declined to elaborate.

Kraft Heinz is the world’s fifth-largest food and beverage company, with eight brands that each pull in more than $1 billion in annual sales.

The company aims to eliminate $1.5 billion in annual costs by the end of 2017. In an earnings statement issued Monday, Kraft Heinz CEO Bernardo Hees said the company was focused on “the difficult and challenging process” of merging the two businesses.

Last month, Kraft Heinz announced plans to move its Chicago-area staff from Northfield to a smaller location in downtown Chicago. The Heinz business continues to operate out of the company’s other headquarters in Pittsburgh.

Mr. Mullen said employees affected by the move will receive a minimum of six months of severance benefits and outplacement services.

Did Kraft ever do ethnic advertising? I remember a few espanol translations slapped on top of white ads starring white actors made by white agencies, but... I got nothin' beyond that. Just a sea of white memories.