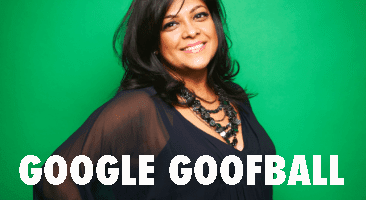 “I’ve worked in the industry for over 20 years, and it certainly used to be a lonely place for women,” said Robb. “It actually isn’t anymore but the job is far from done. We do a lot to champion women at Google and diversity in general, but it’s also important to look externally and ensure we as an industry are developing a strong pipeline of diverse talent, particularly from a technology point of view. How do we get more girls and women in general interested in tech careers?”

Sorry, but if Google is serious about fostering inclusiveness—and Robb is being charged with making it happen—the company should terminate the idiot effective immediately. Sure, it would be an initial loss in the gender and minority figures, but replacing her with someone actually qualified to ignite change ought to be the goal. Robb’s position on promoting women displays her ignorance. While the Google workforce being only 30 percent female is definitely not good, its underrepresentation of Latinos at 3 percent and Blacks at 2 percent is considerably worse. Honestly, those stats make Madison Avenue look like a multicultural Mecca. Boosting the number of women at Google dodges, diverts, deflects, distracts and denies the real dilemma.

Why is it that's causing these these pseudo diversity warriors default to gender diversity immediately and turn a blind eye to ethnic diversity?

Anyone with an eye for numbers would, or should, immediately see the problems with 30% women vs. 2 or 3% ethnic and try to fix the smaller one, not the bigger one that's already comparatively OK.

Is it just laziness? Is it because it's easier to see a bump in numbers if you concentrate on hiring women, because the men who are already there are much more comfortable hiring white women than black men?

I’m glad Intel is making an effort. I am. Numbers lead to talking and sometimes action. I hope the ad agency world tries what the tech world is doing before the century ends.

Quoting “Of the 1,669 people the company hired since January, 1,035 were women, 139 were African American, 222 were Hispanic and nine were Native American, Intel reported.”

What’s unsaid here if you look closer at the numbers is that the biggest group to benefit from this new emphasis on diversity is, always has been, and will probably continue to be, white women.

But numbers are a start. Come on 3% Conference, you of all people should be asking for ad agencies and holding companies to release numbers since your own membership of white women stands to benefit the most.