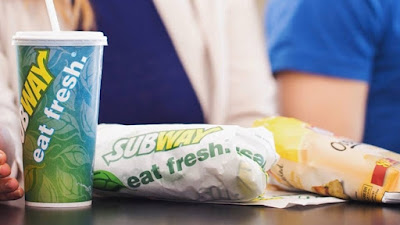 Adweek reported Subway awarded its account to BBDO. It’s just as well, since the current tagline—eat fresh—is kinda creepy in light of the Jared Fogle mess. Plus, picking a new White agency to replace the old one is hardly a fresh move.

Chain hopes to redefine itself with a new shop and executive

Beleaguered sandwich chain Subway has chosen BBDO as its new creative agency of record after a review. The account will be handled by the agency’s New York office.

The company announced its review earlier this summer after two big changes: the departure of chief marketing officer Tony Pace and the news that longtime brand mascot Jared Fogle was under investigation for his alleged involvement in child pornography.

As we now know, Pace was replaced by Chris Carroll, who served as svp of global marketing from 1999 to 2005 and now holds the position of chief advertising officer. The company cut all ties to Fogle after he was taken into custody and agreed to plead guilty to a variety of crimes that will land him in prison for at least five years and brand him a sex offender.

The chain wants to move beyond Fogle, who appeared in more than 300 ads, as quickly as possible after ending its relationship with Boston’s MMB, which ran the account for about a decade.

In a statement, Carroll says, “All the finalist agencies did an excellent job during the process,” adding, “Our decision came down to our confidence in the quality of the team, business orientation, strategic insights and creativity. We look forward to our new partnership with BBDO to accelerate growth for the Subway brand.”

BBDO New York president and CEO John Osborn adds, “Subway is a great brand. We are honored and thrilled to partner with them and to create a fresh narrative for the brand.”

Subway said it decided to hold a review before Fogle’s legal problems went public. Its sales totals dropped in the United States last year, marking an unusual slump for a chain that passed McDonald’s to become the world’s largest in 2011.

After relying on Fogle for 15 years, Subway has given no hints about the direction of its next campaign. It did, however, increase its media spend in 2014 from $517 million to $534 million.

According to sources, other finalists in the review were The Martin Agency, MMB and McCann Erickson.

In a further statement, Carroll thanked “valued partner for the past 12 years” MMB for its “many contributions to Subway’s success.”

The review did not affect Subway’s media agency Mediacom, its social agency 360i, or any of its international partners.

If you’re looking for American minorities in BBDO, get the binoculars. The agency loves to talk about diversity but they just mean foreigners from England, Indonesia, Brazil, etc. Whenever the diversity topic comes up they just trot out their Brazilian offices as an example of how multicultural they are.

The problem is, when you try to pretend that foreigners give you diversity in America, sometimes you get sloppy seconds. BBDO just got raked over the coals for hiring yet another Brazilian art director who tried to import & repeat a popular scam from south america: