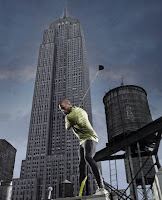 Golfweek magazine apologized for its cover featuring a noose (see Essay 4998). Plus, the publication replaced the editor responsible for running the image.

“We apologize for creating this graphic cover that received extreme negative reaction from consumers, subscribers and advertisers across the country,” said the Turnstile Publishing Company president. “We were trying to convey the controversial issues with a strong and provocative graphic image. It is now obvious that the overall reaction to our cover deeply offended many people. For that, we are deeply apologetic.”

It is now obvious? Wow, talk about reinforcing all the stereotypes regarding the exclusivity of golf.

The article posted at Essay 4998 certainly hinted at Golfweek’s cultural cluelessness. The dumped editor claimed “he checked with Black staff members before making the decision.” Now that was undoubtedly a pleasant exchange. It would be interesting to learn if the Black staffers were on the editorial board or mailroom personnel.

The magazine also originally wrote, “…the Golf Channel, Comcast and the PGA Tour expect a highly paid and high-profile personality such as [Kelly] Tilghman to have the presence of mind, experience and intellect to know the difference between clever and offensive. Tilghman didn’t.”

Apparently, neither did Golfweek.

Finally, if the publication decided it was appropriate to oust its editor, should anyone consider Rev. Al Sharpton’s contention that Tilghman should be terminated too?
Posted by HighJive at 10:52 AM

“In a related story, Tilghman reportedly sent Golfweek editors a nice fruit basket for taking the spotlight off her.”