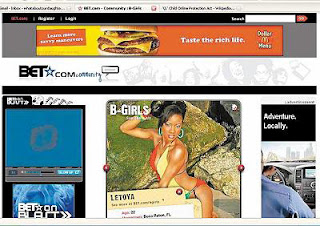 Female problems in a MultiCultClassics Monologue…

• Mickey D’s is catching heat over its online banner ads that have been placed alongside scantily-clad Black women on a BET site. Activist blogger Gina McCauley is asking, “Why are McDonald’s, Nissan, the Army, and the Navy Whoring Out Our Daughters?” McCauley argues, “They’re running an ad for McDonald’s dollar menus next to these Black women sporting G-strings, and they would not be running these ads on … men’s sites featuring white women. … Any company that is running an ad on that site is helping to fund the dissemination of those images. I know that if these were white women, McDonald’s would not be running ads on this page.” Mickey D’s, however, doesn’t see a problem. A spokesperson said, “Different demographics and different audiences want to be communicated to in different ways, and we believe the content reaches the young adult audience that it is intended to reach.” Guess we can look for Ronald McDonald to make an appearance in the next Girls Gone Wild video.

• An online poll from Women’s Day magazine and AOL Body showed if given the choice between having Jennifer Aniston’s body or being a millionaire, three out of four American women would grab the loot. Mickey D’s probably hopes the majority of American women are fat-assed Dollar Menunaires.
Posted by HighJive at 2:53 PM