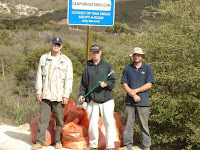 Taking out the trash in a MultiCultClassics Monologue…

• The Minutemen anti-illegal immigration group joined California’s Adopt-A-Road program, taking responsibility for cleaning a 2-mile stretch of highway. The deal comes with the right to post signs identifying themselves at two points on the road. “We’ll be out there in dorky-looking vests, hard hats and goggles, picking up trash,” said a group official. Don’t they realize it’ll be much easier to hire some undocumented workers to do the job for them?

• DMX has an IOU for $1.5 million. The rapper lost a defamation suit brought by the mother of his love child. The mess started when DMX told Sister 2 Sister magazine that he was sexually assaulted during a one-night stand in 2003 that led to the pregnancy. Looks like the woman wound up financially assaulting him.

• Toyota may beat General Motors as Earth’s biggest automaker, a title GM has owned for 76 years. GM has not yet released its international sales figures. The automaker has, however, released lots of employees in recent years.
Posted by HighJive at 10:19 PM