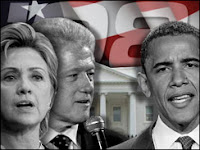 From The Politico via CBS News…

A series of comments from Sen. Hillary Rodham Clinton, her husband, and her supporters are spurring a racial backlash and adding a divisive edge to the presidential primary as the candidates head south to heavily African-American South Carolina.

The comments, which ranged from the New York senator appearing to diminish the role of Martin Luther King Jr. in the civil rights movement - an aide later said she misspoke - to Bill Clinton dismissing Sen. Barack Obama’s image in the media as a “fairy tale” - generated outrage on black radio, black blogs and cable television. And now they've drawn the attention of prominent African-American politicians.

“A cross-section of voters are alarmed at the tenor of some of these statements,” said Obama spokeswoman Candice Tolliver, who said that Clinton would have to decide whether she owed anyone an apology.

“There’s a groundswell of reaction to these comments - and not just these latest comments but really a pattern, or a series of comments that we’ve heard for several months,” she said. “Folks are beginning to wonder: Is this really an isolated situation or is there something bigger behind all of this?”

Clinton supporters responded to that suggestion with their own outrage.

“To say that there is a pattern of racist comments coming out of the Hillary campaign is ridiculous,” said Ohio Rep. Stephanie Tubbs Jones. “All of the world knows the commitment of President Clinton and Sen. Clinton to civil rights issues - and not only the commitment in terms of words but in terms of deeds.”

Referring to the King quote, Sheila Jackson Lee, another Clinton supporter, said Clinton was trying to contrast King and Obama, not to diminish King: “It really is a question of focusing on the suggestion that you can inspire without deeds - what is well known to the child who studies Dr. King in school is that yes, he spoke, but he also moved people to action.”

But other black Clinton supporters found themselves wincing at the Clintons’ words, if not questioning their intent.

[Read the full story here.]
Posted by HighJive at 2:06 PM