Last Monday in Chicago—while the majority enjoyed the MLK Holiday away from work—crowds braved the bitter cold to check out the PSI Diversity Job Fair at Navy Pier. The website hyped the event as “the first and only Diversity Job Fair selected by the National NAACP, the National Urban League and endorsed by leading national media.” Not sure about the final attendance figures, as this report is based on visiting around 1:00-3:00 pm (the fair officially opened at 10:00 am). But there appeared to be a healthy turnout of employment seekers.

The predominately Black audience, mostly ranging from 25-35 years old, sported formal business attire and hauled bags and briefcases filled with résumés. They stood in lines up to a dozen deep, patiently waiting for the chance to shake hands and briefly connect with representatives from various corporations and service groups. A special area was set up for interviews, and giveaway logo-emblazoned pens were plentiful. While the Marines garnered lukewarm interest, the other booths attracted decent gatherings. The participants included AT&T, Comcast, Aflac, bp, Microtrain and Best Buy.

Conspicuously absent were any advertising agencies. Granted, Chicago is not facing pressure from the New York City Commission on Human Rights. Plus, the local ad community might whine that recent downsizings prohibit active recruiting.

At the same time, it’s unlikely there’s a better and more convenient way to lure minority prospects. Can’t imagine the job fair organizers charged hefty fees to join the extravaganza. After all, admission was free.

On a date designated to celebrate diversity, the advertising industry literally took the day off.

How typical. And stereotypical. 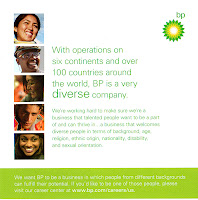 Email ThisBlogThis!Share to TwitterShare to FacebookShare to Pinterest
Labels: diversity in advertising

you trying to imply that when the ad community talks diversity, that they don't mean it and won't back it up with action when opportunities present themselves?

How dare you, High Jive. How dare you be such a divisive race-baiter.

It's up to Blacks, Hispanics and Ore-orie, er..."Asians" to seek out agencies and media companies for employment opps.

There's no free lunches anymore, son. Times are tough all the way around.

Pull yourself up by your bootstraps like the rest of us.

You people can do it--we're pulling for you.