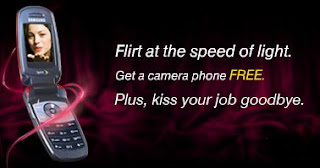 Adding insult to injuries in a MultiCultClassics Monologue…

• Sprint continues to sprint ahead with corporate restructuring, replacing three key executives—including the Chief Marketing Officer. “Permanent leaders will be named in conjunction with a review of overall strategy and an effort to streamline operations,” said chief executive Daniel Hesse. “I have no predetermined timeframe in filling these positions but plan to act as quickly as possible.” In some areas, the company is apparently not interested in moving at the speed of light.

• Golf Channel Anchor Kelly Tilghman returned to work after her suspension and opened with another formal apology. “I’m Kelly Tilghman. It’s an honor to be with you again,” said the woman. “In a recent live broadcast, I used an inappropriate word that was offensive to many. Over the last two weeks, I’ve taken this time to reflect and truly understand the impact of what I said. While I did not intend to offend anyone, I understand why those words were hurtful. I am terribly sorry for any hurt that I’ve caused. I would like to express my deepest apologies.” Tell it to the fired editor from Golfweek magazine.

• Don Imus is upsetting advertisers with his inappropriate remarks again. This time, the shock jock actually insulted paying sponsor FlatSigned Press, calling their products “cheesy.” The company now charges Imus with hurting their sales, and a $4 million lawsuit has been filed. Additionally, Green Bay cheeseheads are demanding an apology.
Posted by HighJive at 2:05 PM