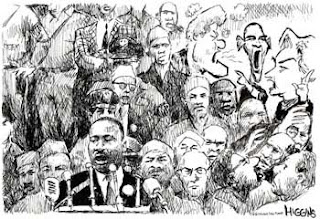 (Cartoon from The Chicago Sun-Times.)

Nutcase closed in a MultiCultClassics Monologue…

• Senator Larry Craig received help from the ACLU, as the organization filed a brief citing a Minnesota Supreme Court ruling that states folks having sex in closed public toilet stalls “have a reasonable expectation of privacy.” The 38-year-old ruling means prosecutors can’t prove the senator was inviting the cop to engage in public sex. The ACLU contends that even if Craig was initiating naughty behavior, his actions were not criminal. Look for Craig to celebrate with a private party at the nearest airport men’s room.

• O.J. Simpson watched his bail amount double as a judge reprimanded him for violating the terms of his original bail. “I don’t know, Mr. Simpson, what the heck you were thinking—or maybe that’s the problem—you weren’t,” declared the judge. “I don’t know if it’s just arrogance. I don’t know if it’s ignorance. But you’ve been locked up at the Clark County Detention Center since Friday because of arrogance or ignorance—or both.” It could have been worse for Simpson—he could have been locked up at the airport toilet stall with Senator Larry Craig.
Posted by HighJive at 9:24 PM