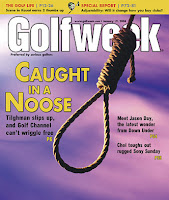 Just when it seemed as if the controversy over host Kelly Tilghman’s recent comments on the Golf Channel was fading, Golfweek magazine this week revived it with a cover that shocked the golf community and appalled much of it.

Beside the headline, “Caught in a Noose,” the magazine pictured a swinging noose, a reference to Tilghman’s joking suggestion that young golfers faced with the specter of Tiger Woods “lynch him in a back alley.”

Tilghman made that remark Jan. 4. Newsday reported it four days later, and one day after that, she was suspended for two weeks. She is due back next week for the Buick Invitational.

PGA Tour commissioner Tim Finchem harshly criticized the magazine Thursday in USA Today. He deemed “imagery of a swinging noose on its cover to be outrageous and irresponsible. It smacks of tabloid journalism. It was a naked attempt to inflame and keep alive an incident that was heading to an appropriate conclusion.”

Bob Combs, the Tour’s senior VP of communications, and other staff members met with editors from Golfweek Thursday at the PGA Merchandise Show in Orlando, Fla.

Combs said the meeting had been scheduled for weeks and was not arranged because of the cover. He said the subject did come up but would not characterize the discussion. He said Finchem’s comments in USA Today are “reflective of the PGA Tour view.”

Golfweek editor Dave Seanor did not return calls seeking comment. He told USA Today, “Was it an arresting image? Yes, it was. We chose it because it was an image we thought would draw attention to an issue we thought deserved some intelligent dialogue.”

Seanor told the Orlando Sentinel he checked with black staff members before making the decision. “For this story, that’s the image that comes to everybody’s mind is a noose,” he said.

The magazine devoted three articles to the topic, including an editorial asserting the newsworthiness of the story, writing that “the Golf Channel, Comcast and the PGA Tour expect a highly paid and high-profile personality such as Tilghman to have the presence of mind, experience and intellect to know the difference between clever and offensive. Tilghman didn’t.”

There were two articles on Tilghman in Golf World, Golfweek’s main competitor.

Golf World’s cover story this week? “The Tragedy of Bill Spiller: The story of one man’s battle to break the color line.”

NBCSports.com removed its link to Golfweek because of the controversial cover.

Dan Higgins, a spokesman for the Golf Channel, declined to comment on the cover but said e-mails from viewers generally have been more supportive for Tilghman since the suspension was announced.

Woods is a friend of Tilghman’s, and his agent last week declared the matter a “non-issue.”

Combs said of Tilghman, “A lot of the players and staff of the PGA Tour have gotten to know Kelly, and it was clear to us that although her comments were very unfortunate, they were in no way intentional or malicious.”
Posted by HighJive at 12:29 AM