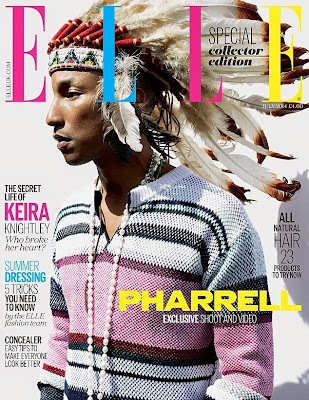 Pop star and producer Pharrell Williams has had an amazing year in the public eye, with the commercial success of his single “Happy” and the countless other hits he’s produced—that is, until now.

Williams is featured on Elle UK’s July cover, with the magazine saying its choice of Williams for the cover is “continuing the tradition of featuring cult male icons.”

But photos of the singer wearing a traditional American Indian war bonnet have gone viral and sparked controversy, with the media condemning Williams for misappropriating another culture.

The #NotHappy campaign was created on Twitter within minutes of the photo’s release, where American Indians and fan voiced their disapproval.

Williams has especially become a fashion icon over the last year for popularizing his signature Vivienne Westwood Buffalo hat, aka the Smokey the Bear hat—which he explains is actually an ode to Malcolm McLaren’s Buffalo Gals’ video.

In fact, the singer insists he wore, and was photographed in, that same hat years ago, but that “no one was paying attention at the time.”

Many have been quick to assume Williams is the latest pop star to join the ranks of celebrities like Heidi Klum—who was recently called racist for posting photos of a ‘Redface’ photoshoot—as well as Katy Perry, Avril Lavigne, Nick Cannon and Macklemore, who were also under fire for using another culture’s garb as a costume.

However, in an interview with O Magazine back in 2012, Williams was quoted as saying he has “Native American and Egyptian heritages.”

But according to Indian Country, having native ancestry is not enough, because “not all Indians wear feather headdresses” and “feathers are earned over the course of one’s lifetime.”

The artist released a statement addressing the headdress controversy, simply saying: “I respect and honor every kind of race, background and culture. I am genuinely sorry.”