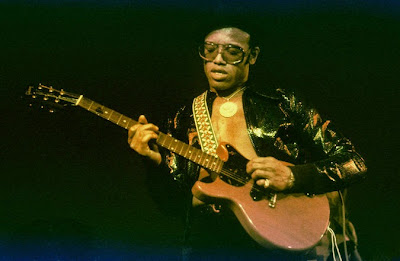 Bobby Womack, Royalty of the Soul Era, Dies at 70

Bobby Womack, who spanned the American soul music era, touring as a gospel singer in the 1950s, playing guitar in Sam Cooke’s backup band in the early ’60s, writing hit songs recorded by Wilson Pickett and the Rolling Stones and composing music that broke onto the pop charts, has died, a spokeswoman for his record label said on Friday night. He was 70.

Mr. Womack, nicknamed the Preacher for his authoritative, church-trained voice and the way he introduced songs with long discourses on life, never had the million-record success of contemporaries like Pickett, Marvin Gaye, Al Green and Otis Redding. His sandpaper vocal style made him more popular in England, where audiences revere what they consider authentic traditional American music, than in the United States.

But the pop stars of his time considered Mr. Womack royalty. His admirers included Keith Richards, Rod Stewart and Stevie Wonder, all of whom acknowledged their debt with guest performances on albums he made in his later years.

Mr. Womack’s 2012 album, “The Bravest Man in the Universe,” is an avant-garde collaboration with a new generation of musicians. It combines old and new material by Mr. Womack, which the British producer Richard Russell and the alternative rock songwriter Damon Albarn mixed with programmed beats, old gospel recordings, samplings of Cooke and other sounds, some played backward or sped up.

The album earned favorable reviews on both sides of the Atlantic. Rolling Stone ranked it No. 36 on its list of the 50 best albums of the year.

“I don’t understand a lot of the things they were doing,” Mr. Womack said of his collaborators in an interview with The Guardian. “I would never have dreamed of doing stuff like that, but I wanted to relate to the people today.”

Mr. Womack had his first major hit in 1964. He was under contract with Cooke’s SAR label when he wrote the song, “It’s All Over Now,” and recorded it with his group, the Valentinos, which consisted of him and four of his brothers. The song was slowly rising on the R&B charts when Cooke told him that a British band called the Rolling Stones had liked it so much that they planned to record it, too.

The song became the Stones’ first No. 1 single in Britain and their first international hit, while the Valentinos’ version sank.

“I was very upset about it,” Mr. Womack said in an interview. “It was like, ‘They stole my song.’”

Later, he said, as Cooke had predicted he would: “I stopped being upset when we got our first royalty check. That changed everything.”

Many of his songs were recorded by others, often with greater success than his own renditions. Janis Joplin included “Trust Me” on her album “Pearl,” the J. Geils Band recorded “Lookin’ for a Love,” which reached the Top 40 in 1972, and Pickett recorded “I’m a Midnight Mover” and 16 other Womack songs.

In 1971 Mr. Womack played guitar on, and helped produce, Sly Stone’s most ambitious album, “There’s a Riot Goin’ On,” now a soul classic.

Bobby Dwayne Womack was born on March 4, 1944, in Cleveland. His father, Friendly, was a steelworker and part-time Baptist minister. His mother, Naomi, played the organ for the church choir. Under their father’s direction, Bobby and his brothers Cecil, Curtis, Friendly Jr. and Harry formed a gospel group, the Womack Brothers, which began touring in 1953.

Sam Cooke, who spent the early ’50s as lead singer of a gospel quintet, the Soul Stirrers, first heard the brothers sing on a visit to Cleveland, when Mr. Womack was about 7. A decade later, Cooke invited the brothers to join him in Los Angeles, where he had his own record company and was a successful secular pop balladeer.

The Womacks were raised to believe that hell awaited gospel singers who sang pop music, Bobby told interviewers, and at first they resisted Cooke’s summons. They made several gospel records for SAR before changing their name to the Valentinos and recording their first secular songs, a decision that caused a lasting rift with their father, until shortly before his death in 1981.

By 17, Mr. Womack was the lead singer of the new group, the youngest guitarist in Cooke’s touring band, and an emerging hit songwriter. His song “Lookin’ for a Love,” a remake of a gospel composition, became a modest hit for the Valentinos on the R&B chart in 1961 (a decade before the J. Geils version). Royalties from “It’s All Over Now” alone reportedly made him financially secure for most of his life.

Then, when he was 20, Mr. Womack’s career hit a wall. The Dec. 11, 1964, shooting death of Cooke, during a dispute with a Los Angeles motel owner, left Mr. Womack without a mentor or a record label. By most accounts, his decision to marry Cooke’s widow, Barbara Campbell, just a few months after the shooting, made him something of a pariah in the music world.

Unable to land a new record contract, Mr. Womack left the Valentinos and settled into backup work for contemporaries like James Brown, Aretha Franklin, Joe Tex, Joplin and a young, little-known Jimi Hendrix. His solo career began to revive in the late 1960s and early ’70s. Two albums he recorded for United Artists in the 1970s are considered soul classics: “Communication” (1971), which yielded the hit “That’s the Way I Feel About ‘Cha,” and “Understanding” (1972), which included “Woman’s Gotta Have It.”

In 1981 he released two of his most critically acclaimed albums, “The Poet” and its sequel, “The Poet II,” which featured several duets with the soul singer Patti LaBelle. He joined the Rolling Stones to sing a duet with Mick Jagger on “Harlem Shuffle,” on the Stones’ 1986 album, “Dirty Work.”

In 2009 Mr. Womack was inducted into the Rock and Roll Hall of Fame. His marriage to Ms. Campbell, as well as two subsequent marriages, ended in divorce. His survivors include two sons, Truth and Vincent. Although hip-hop stars frequently sampled the soul music of his era, Mr. Womack refused most requests by others to use his recordings in their work, he told a British interviewer in 2004. Despite his well-publicized marital problems and struggles with drugs and alcohol, he said, he remained a gospel singer at heart.

“Me being from the old school, I would not say ‘bitch’ on a record,” he said. “I couldn’t face my mother if I did.”