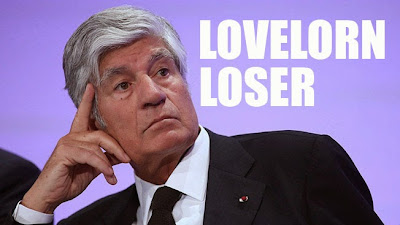 Adweek reported Publicis Groupe CEO Maurice Lévy continues to display heartache over his broken engagement with Omnicom CEO John Wren. Lévy confessed the proposed merger was “the dream of my life.” Holding company CEOs really need to have their dreams professionally interpreted and evaluated. Wonder if the ex-lovers decided how to handle the $500 million termination fee for their last tango in Paris. Hell, the final bill will far exceed WPP Overlord Sir Martin Sorrell’s divorce settlement.

Maurice Lévy Says Omnicom Merger Was ‘Dream of My Life’

Publicis Groupe CEO Maurice Lévy opened up today at a Salesforce.com conference in Paris about the dashed hopes he had for his company’s merger with Omnicom Group—a failed initiative that could have been the pinnacle of his well-regarded career but, with its collapse, tarnished that reputation, he suggested.

When Salesforce CEO Marc Benioff asked Lévy whether innovation comes from taking risks, the holding company chief admitted that “one of the problems I have to fix in my company is to take more risks.”

Lévy added: “You must be open to changing every single day, not hesitating to question yourself and to reinvent everything. Also don’t hesitate to stop. I stopped a merger, which was the dream of my life, because we were derailing and not going where we wanted to go. You can take huge risks and sometimes you can also accept to lose face, which I did, because I thought we were going in the wrong direction.”

Perhaps reflecting on the nine-month long process of trying to reach consensus with Omnicom through intermediaries like lawyers and investment bankers, Lévy continued: “In growing and following the rules, and becoming more compliant we encounter hurdles, we take less risks. We give the lawyers and these compliant people the power which gives a deceleration on the risks that you can take. I think that innovation is state of mind.”