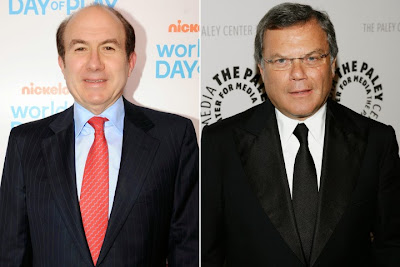 The New York Post reported WPP Overlord Sir Martin Sorrell chastised Viacom CEO Philippe Dauman for partying too much at Cannes; additionally, Sir Marty “further complained that the Cannes Lions festival has turned into a superficial bash that has gotten away from its roots as an agency ad competition and turned into a crass show of wealth.” Um, Sorrell’s 2013 income of $50 million makes him among the biggest crassholes at Cannes. Here’s a man who literally bought his way into the industry. Additionally, Sorrell’s money-driven thinking and tactics—where billable hours trump big ideas—have helped the ad game get away from its roots in the worst ways imaginable. Sir Marty whines about the degradation of Cannes, yet he doesn’t realize the obscenity of the 2011 introduction of a special trophy saluting holding companies—especially since corpulent WPP has become a routine winner of the award. If Cannes has indeed become “a crass show of wealth,” it’s because narcissistic One Percenters like Sorrell consistently crash the party.

Sorrell chastises Dauman for too much partying

While the sessions at the Cannes Lions were all about native advertising, or sponsored content, it was perhaps appropriate that Robin Thicke sang “Blurred Lines” at Viacom CEO Philippe Dauman’s party on Thursday night.

Dauman, who invited the crooner to entertain advertising bigs, revealed at a session that Sir Martin Sorrell had been dancing to the song at the Château de la Napoule event.

But while Sorrell may have had fun, he further complained that the Cannes Lions festival has turned into a superficial bash that has gotten away from its roots as an agency ad competition and turned into a crass show of wealth.

“There should be less partying and more working,” he said, to which Dauman responded: “How about partying while we work?” Whoever accused Dauman of being dull clearly has never seen him in the south of France.