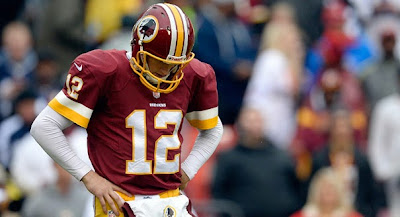 By Jonathan Topaz and Lucy McCalmont

In a major blow to the Washington Redskins, the U.S. Patent and Trademark Office on Wednesday canceled six federal trademarks of the team name because it was found to be “disparaging” to Native Americans.

“We decide, based on the evidence properly before us, that these registrations must be cancelled because they were disparaging to Native Americans at the respective times they were registered,” the Patent Office’s Trademark Trial and Appeal Board wrote in a 2-1 decision.

The Redskins’ team name has become a divisive political issue over the past few years, with even President Barack Obama saying the club should consider changing it. Senate Majority Leader Harry Reid and Senate Democrats also have pressed owner Dan Snyder to change the name. On the other side, conservatives have either defended keeping the name, arguing that it isn’t a slur, or been silent on the uproar.

The trademark attorney for the Redskins, Bob Raskopf, downplayed the ruling and vowed the team will win an ensuing appeal.

“We’ve seen this story before. And just like last time, today’s ruling will have no effect at all on the team’s ownership of and right to use the Redskins name and logo,” he said in a statement, citing rulings in 1999 and 2003. “We are confident we will prevail once again, and that the Trademark Trial and Appeal Board’s divided ruling will be overturned on appeal.”

Reid lauded the trademark decision on the Senate floor Wednesday, saying it reinforces the push for the Redskins to change the name.

“Daniel Snyder may be the last person in the world to realize this, but it’s just a matter of time until he is forced to do the right thing and change the name,” he said.

“The writing is on the wall,” Reid added. “It’s on the wall in giant, blinking, neon lights.”

The majority leader also praised the work of Sen. Maria Cantwell (D-Wash.), the former Senate Indian Affairs Committee Chairwoman who has been a major leader on the issue. She spoke on the Senate floor to hail the “landmark decision.”

Senate Indian Affairs Committee Chairman Jon Tester (D-Mont.) also hailed the ruling, saying on Twitter: “This decision is a step forward for Indian Country & for all Americans who champion tolerance.”

Del. Eleanor Holmes Norton (D-D.C.), a vocal critic of the team name, slammed Snyder for trying to have the decision overturned.

“I don’t know how many times he needs to be told that the name is disparaging. I understand he says he’s going to appeal. Shame on him,” she said in an interview. “I mean, does he like losing?”

Norton had co-sponsored a bill last year to amend the 1946 Lanham Act, the law that prohibits the registration of trademarks that disparage any group. Her legislation would include “redskins” as a disparaging term if it is contained in a trademark with connotations to the Native American community.

A National Football League spokesperson said the league would not be issuing a separate statement from the team.

“I hope this ruling brings us a step closer to that inevitable day when the name of the Washington football team will be changed,” said plaintiff Amanda Blackhorse. “The team’s name is racist and derogatory.”