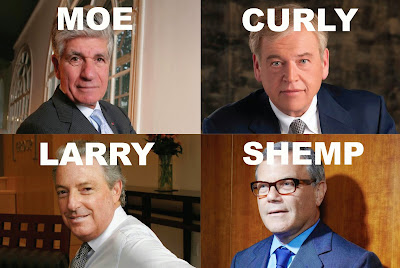 Campaign let the four stooges in charge of the major holding companies—Publicis Groupe, Omnicom Group, IPG and WPP—share their thoughts on Cannes. Maurice Lévy whined over the failed merger between Publicis Groupe and Omnicom Group, while John Wren made zero mention of the event. Michael Roth opened with a thinly veiled reference to the non-marriage, segueing to brag about his company’s focus on doing award-winning work. Gee, it seems like only yesterday when Howard Draft admitted that 80 percent of his agency’s output sucked, arguably quite an underestimation. Sir Martin Sorrell offered the best commentary:

This year’s event will, no doubt, be the biggest yet and I have some sympathy for those who worry if it has become a little too corpulent. How long, they wonder, before it collapses under its own weight?

Where I part company from the detractors, though, is the point at which they begin to pine for the “glory days” of advertising.

Ask them to describe those days and they will wax heroic with tales of creative derring-do and epic lunches. But listen closely and, all too often, what you hear them describe is essentially an exclusive club: Euro-centric, male and mono-medium.

Today’s Cannes may be big and brash, but it’s also emphatically open, diverse, international and multidisciplinary (extending even to areas such as healthcare communications and data). In other words, it’s a reflection of our modern industry and society.

Um, somebody tell Sir Marty that women comprise 27 percent of this year’s Cannes judges. And minorities are even more underrepresented at the gala. Indeed, Cannes 2014 is an accurate reflection of our modern industry—which continues to not reflect our society at all.