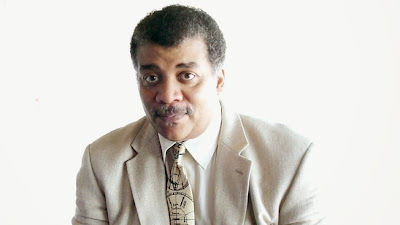 Cannes broke away from the clichéd convention of only spotlighting Black recording artists by featuring Astrophysicist Neil deGrasse Tyson in an Ogilvy & Mather-sponsored lecture. It was probably an OgilvyCulture initiative. Look for the agency to turn the event into a Black inventors ad next February.

Neil deGrasse Tyson: We Must Celebrate Innovators or ‘Move Back Into the Cave’

Cannes creatives challenged to be part of the solution

CANNES, France—He is one of the world’s only household names in the field of science, but Neil deGrasse Tyson definitely wishes that weren’t the case.

Standing before an audience of global creatives today, the astrophysicist and host of Cosmos: A Spacetime Odyssey told Cannes Lions attendees that the world needs to return to the time when it valued great thinkers and honored them as national heroes.

Instead of showing slides of star maps or X-ray images of distant galaxies, Tyson chose to feature pictures of money in his appearance at the festival’s fourth annual Ogilvy & Mather Inspire lecture. He presented slide after slide of international currency that featured and honored scientists as cultural icons. Today, few such bills can be found, and Tyson fears the world is losing its admiration for science.

“Somebody cared enough about it to put it on the currency. These are the things that affect your culture. A whole culture can be given to problem solving simply by the forces operating within it and around it, forces you might not even be aware of while you’re in the middle of it.”

Instead, Tyson cited his home nation of the United States as a place where politicians, media and pop culture are often scientifically ignorant or even hostile.

To highlight how nations and cultures can lose their focus on science, he gave the example of the Islamic world around 1000 AD, “one of the most intellectually fertile periods in the history of the human species.”

“Mathematics, agriculture, engineering, medicine, navigation—all of that happened while Europe was disemboweling heretics at the same time. So what happened? Well, it wasn’t forever.”

The rise of one influential philosopher, Al-Ghazali, early in the 11th century popularized the idea that “manipulating numbers was outside your spiritual accountability.” The result, Tyson said, was a centuries-long evaporation of scientific emphasis in Muslim culture.

Speaking to Adweek after the Cannes Lions session, Tyson said the stakes are incredibly high—up to and including our own species’ destruction.

“I’m an acute observer of trends in cultures, because some trends are away from innovation. And if it’s away from innovation and creativity, then problems you already know exist, and especially problems that you don’t know will yet arise, can be the unweaving of your civilization, and I don’t want to be in that world.”

Reversing the trend, he said, is partly the responsibility of marketers and media influencers, many of whom are in attendance here at the Cannes Lions International Festival of Creativity.

We must return to celebrating those who combine creativity with science and discovery, Tyson said, or we risk falling into an intellectual tailspin that might prove irreversible.

“Their activities should be cherished These are the people we should hold up high. We should build statues to those people. We used to. Those are the folks who advance frontiers. The inventors, the explorers, the discoverers, the innovators,” Tyson said.

“These are the people who shape civilization. If you don’t cultivate and nurture that, you might as well just move back into the cave, because that’s where we’re going to end up without it.”