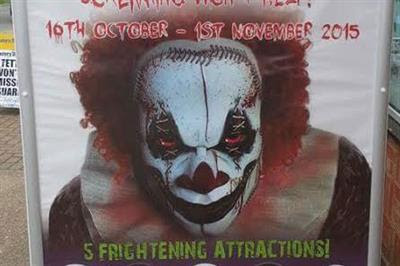 Campaign reported on a Halloween poster that was banned by the Advertising Standards Authority for being irresponsible and offensive. The image featured a bloody, white-faced clown, prompting the ASA to declare, “We considered that the overall presentation of the image was likely to distress young children…” Um, why not also condemn the White clowns terrifying the kids depicted below? 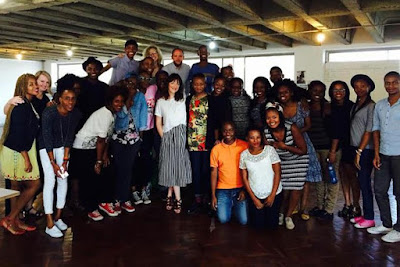 A poster promoting a Halloween event in Norfolk has been banned for being irresponsible and causing offence.

The outdoor ads for Norfolk Dinosaur Park’s Primevil event prompted 23 complaints to the Advertising Standards Authority on the grounds that it would cause fear and distress and was inappropriate for outdoor display in an untargeted medium.

Many of the people who complained said the image was too distressing for children.

The posters featured the image of a clown with bright red eyes with stitches and blood dripping from his forehead. His mouth was black and appeared to have been cut open.

When contacted by the ASA, Norfolk Dinosaur Park said they had removed posters that were close to schools where young children may be present. They removed a total of 12 out of 34 initially placed.

In its ruling, published today, the ASA noted the ad must not appear again in its current from and the company was told to ensure their marketing was reasonably targeted.

The ASA ruled: “We noted that the clown was leaning towards the camera and grinning with a menacing expression, that its eyes glowed red and blood dripped down its face, and that its eyes and forehead were stitched.

“We considered that the overall presentation of the image was likely to distress young children, particularly but not only in combination with the text “PRIMEVIL. SCREAMING WON’T HELP!” – which was presented as though it was written in blood – and that it was unsuitable for display in an untargeted medium where it was likely to be seen by them.”

The watchdog ruled the ad breached CAP Code rules 1.3, for responsible advertising, and 4.2, for harm and offence.