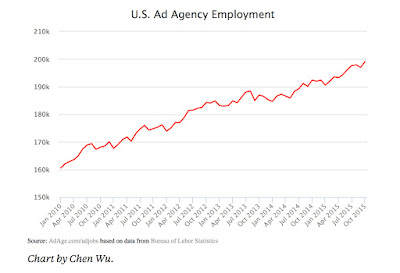 Advertising Age reported employment at U.S. advertising agencies hit its highest level since 2001. No mention of Black employment levels being at an all-time low for the industry. Which makes the rising numbers of White people dominating the business even more obscene. Of course, everything will be solved by 2079. 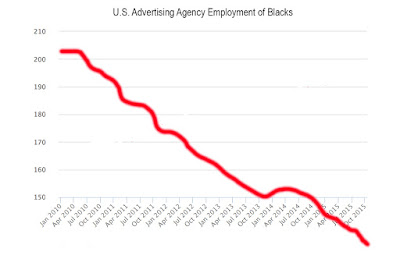 Staffing Nears 200,000, Sign of Strength for Agencies in Digital Era

U.S. ad agency employment is at its highest level since 2001, a sign of strength in an industry that is adapting to the digital era.

Advertising agencies employed 199,100 people in October, the highest level since May 2001, according to Ad Age Datacenter’s analysis of jobs data released today by the Bureau of Labor Statistics.

Robust employment is an indication of how the agency business is successfully navigating marketing’s transition to digital. Agencies from all advertising and marketing-services disciplines generated nearly 40% of 2014 U.S. revenue from digital services, according to Ad Age Datacenter’s analysis.

Employment remains below its all-time peak of 207,400 in August 2000 in the frenzy of the dot-com bubble.

Agency employment in 2000 and 2001 was artificially boosted by ad spending—largely offline, in TV and print—by short-lived dot-coms flush with cash from venture capital and initial public offerings.

The dubious dot-coms are long gone, but agencies are more digital than ever.

I will never understand why this one sector of American industry is considered so sacred.

It's not taxed, it's not asked to account for locking out people of color in 99% of its uppermost jobs, it's entirely run by foreign holding companies and it allows for white people to build careers and lives but no one else.

Maybe it's karma that it's dying and everyone young is running for the exits to better and more fun/exciting/rewarding industries.

You can only grow so far in isolation and it's not like the new generation (that's even younger and more multicultural) is invested at all to fight for advertising or the ad industry to survive.

They're just installing ad blockers and tuning out the people that blocked THEM out for generations in the first place.

If the real data broken down by race would ever be released these agencies would come off as the biggest hypocrites. No other industry fakes diversity harder then the advertising. So its in their biggest interest to hide & cover up all evidence of discrimination & racism. These white execs love hiring diversity officers, hosting WAATBP & ADcolor awards & putting on diversity fairs etc.


Now there are a few less POC. Commonground/MGS Shuts Down Over Financial Dispute http://www.adweek.com/agencyspy/commongroundmgs-shuts-down-over-financial-dispute/98541