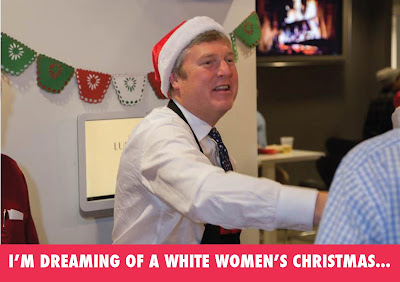 Campaign published “My New Year’s wish list” by BBDO New York President and CEO John Osborn. The lead wish read, “That the push for greater diversity in the creative ranks of agencies yields greater results.” Um, when did diversity become segregated to the creative ranks? Is there fair and equal representation in all the other departments? Maybe Osborn is another jumper on the 3% bandwagon for more White women as creative directors. He could recruit She-Hulk and boast hiring a woman of color. His New Year’s resolutions should include applying for certification. Hey, it’s easier than trying to persuade his bosses at Omnicom to cough up EEO-1 data on staffing figures.

BBDO New York president and CEO shares his hopes for 2016

With the New Year upon us, here are some of my wishes for the year ahead. In no particular order:

That the push for greater diversity in the creative ranks of agencies yields greater results.

That the decision to uphold Pete Rose’s ban from Major League baseball puts the issue to rest once and for all.

That, someday, there is one street in New York City that is not under construction.

That something actually gets done in Washington and that politics attracts better, more qualified candidates from the private sector.

That “Happy Holiday” decorations and messages not appear before Halloween.

That the term “unicorn” goes the way of, well, unicorns.

That Ricky Gervais continues to surprise and offend during the Golden Globe awards.

That the Olympic Games in Rio be fraught with excitement on the field, rather than off.

That the American Red Cross doesn’t have a major catastrophe to deal with this year.

That Uber, black cars and taxis can all get along (so we can get where we need to go).

That Cannes not add any more new categories.

That someone invents the mother of inventions … how to create more time to do everything we want out of life.

That people like me stop publishing year-end wish lists!

And that the New Year brings peace, prosperity, a greater sense of purpose and togetherness.

John Osborn is president and CEO of BBDO New York.

Gawd I wish I hadn’t clicked on that EEO-1 data link and read the comments. That’s quite the diversity scam they have going on. No one has ever called them out on that?

That ad agencies admit that diversity has mostly benefitted white women, and find a way to change that.

That the 3% Conference recognizes that they singlehandedly killed any momentum in ethnic diversity, and replaced it with gender diversity that almost exclusively benefits white women.

That the holding companies are forced by the New York City Comptroller to release their EE0-1 stats.

That the holding companies wake up, like Scrooge on Christmas, realize what they’ve done wrong and fix it by releasing their EE0-1 stats WITHOUT prodding or legal threats.

That Tiffany Warren starts tracking hard, solid numbers of the number of people of color she personally hires in 2016.

That Tiffany, Doug, Singleton Beato, Felicia B. Geiger, Gina Grillo and all the rest of the Adcolor organizers take the tens of thousands of dollars that Omnicom pays them for participating in Adcolor (which just serves as a smokescreen to stop Omnicom’s agencies from actually diversifying) and use that money to TRACK SOME ACTUAL DAMN DIVERSITY STATISTICS IN US ADVERTISING.

That all of the above spend 99% of their energies this year on retaining people of color in advertising who are already in the system, and 1% on encouraging middle schoolers to join the industry. Reversing what they’ve been wasting all their energy on all this time, in other words.

That the PepsiCo guy who complained about everyone in advertising being white, heterosexual males puts his money where his product is and gives a nice, fat contract to an ethnically diverse agency

That for every vaguely brown person an all-white ad agency casts in their ads, they hire two more actual ones full-time behind the scenes.

I'd like to not constantly be The Only One In the Room.

Just once I'd like to see someone of any color with me at the table, or across the table.

Chief Diversity Officers that have to show the exact number of people they've personally hired/lost at the end of each year.

A group photo from Cannes, ADC, pick your awards show where it's not a sea of white face in every. single. picture.

For some reporter or the NYC Comptroller to dive into the bullshit diversity numbers the holding companies and agencies release, and force them to speak the truth.

That every time an ad agency, holding company or diversity officer crows "We spend X amount of dollars with diverse suppliers each year!" they have to qualify it by saying "and the specific amount spent with white women versus other vendors is XYZ."