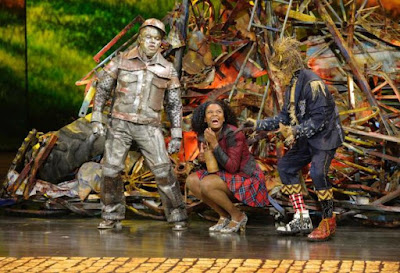 ‘Reverse racism’ social media backlash over ‘The Wiz’ is absurd

If there are any doubts remaining over how polarized this nation is over race, consider the social media backlash that developed over a simple TV musical.

NBC drew 11.5 million viewers Thursday evening with a live production of “The Wiz.”

The telecast also prompted immediate cries of “reverse racism” from some whites upset with the all-black cast.

“Can you imagine the outrage if a show advertised an “All White Cast”?! But #TheWizLive is getting praised for having an “All Black Cast” tweeted a user named Melly.

Another user wrote: ‘why are there no whites starring in #TheWiz? this is racist! can u imagine if it were the other way? #whitelivesmatter #TheWizLive.’

Yes, we can imagine. But we don’t have to. They called that one “The Wizard of Oz.”

Let’s get this out of the way first: There is no such thing as reverse racism. Something is either racist or it’s not.

Secondly. The Wiz debuted on Broadway 40 years ago before it became a motion picture starring Diana Ross, Michael Jackson and Richard Pryor.

If you’re just learning about it now, you have bigger problems than your faulty racial meter.

The argument over “The Wiz” is similar to ones we’ve heard for generations about black organizations. It goes something like this:

Here’s the response: We’ve had historically white colleges and universities in our country We just didn’t call them that. Instead, we used names like Harvard, Yale, Georgetown and Ole Miss.

“The Wiz” racist? Please. Only if they had made all the wicked witches white.