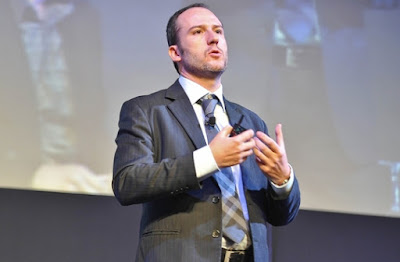 Adweek reported Sprint appointed a new Chief Marketing Officer, tapping Roger Solé, who has run the beleaguered company’s Latino advertising and acquisition initiatives. Solé replaces Kevin Crull, who had served as CMO for a whopping seven months. Wow, seems like the Frobinson family lasted longer than Crull. And why are minorities only allowed to lead when an enterprise is in a death spiral?

Sprint Names a New CMO, Promoting Its Head of Hispanic Advertising to the Role

Roger Solé was also president of ops in Puerto Rico

After seven months on the job, Kevin Crull is out as Sprint’s chief marketing officer, replaced by Roger Solé, who has led the company’s Hispanic advertising and acquisition efforts and served as president of its operations in Puerto Rico.

In a statement, Sprint CEO Marcelo Claure praised both executives, noting that Solé has been “integrally involved in shaping many of our key acquisition initiatives that have helped drive the growing momentum we are now enjoying. [He] has increased our ability to serve Hispanic customers and has spurred innovation across the organization.”

Solé will oversee advertising, customer acquisition and retention, and all digital and social efforts.

Claure said Crull “has guided some of our most important initiatives, designing and launching innovative and disruptive programs that have been resonating positively with customers.” The executive’s marketing skills and “broad management and operational expertise” make him a natural fit for the newly created role of central region president, Claure said.

Since joining Sprint in May, Crull had launched several high-profile consumer offers, including “All-In,” “Direct 2 You,” “iPhone Forever,” and its 50 percent off campaign. Regardless, Sprint slid behind T-Mobile into fourth place among domestic wireless carriers this year.

This marks the second CMO shuffle at a major advertiser in as many days. It follows Walmart’s announcement that its U.S. chief marketer, Stephen Quinn, would retire next month. Former Target CMO Michael Francis will join the retailer in a senior consulting capacity.