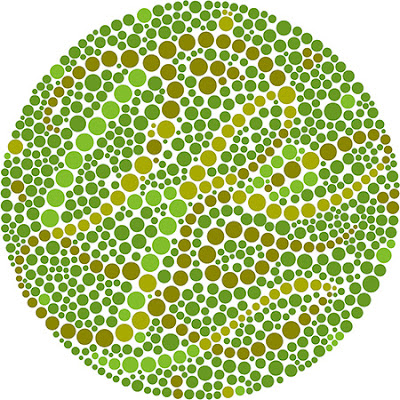 Adweek spotlighted a Coca-Cola campaign by Denmark advertising agency Essencius presenting imagery that could only be seen by colorblind people. Based on the People page at Essencius’ website, the place does not appear to be colorblind when it comes to hiring. Then again, it is Denmark.

Ad of the Day: This Coca-Cola Campaign Can Be Deciphered Only by Color-Blind People

Ishihara image is cryptic to everyone else

Can you connect the dots?

Ad agency Essencius recently launched a teaser campaign in Denmark touting stevia- and cane-sugar-sweetened Coca-Cola Life, but only about 5 percent of the population could actually see the message.

That’s because the copy was “hidden” in an image that looked liked blobs of greenish-brown bubbles to most viewers. (Technically, they’re called reverse Ishihara images.) Color-blind people, however, saw the word “Life” nestled within the design.

“Our idea is based on the premise of engaging many by targeting the few,” explains Essencius managing partner Brian Orland. “Surprising people and getting them curious about the hidden message in the campaign has had a great impact on the engagement rate.”

The images appeared in digital ads, social media, outdoor installations and at department-store sampling sessions. According to the agency, the unorthodox approach generated substantial earned media, reaching more than 17 percent of the Danish population between 10 and 60 years old.

Though kind of random (why use color blindness as a campaign hook at all?), the gambit does seem in keeping with the general trend toward social inclusiveness in advertising, and recalls brands’ obsession a few months back with the color of a certain dress. (It’s pink, dammit!)

That said, marketers should proceed with care. Some folks might construe such campaigns as exploitative or offensive, and take brands to task for trying to leverage the unique qualities or perceptions of specific groups for commercial gain.

Luckily for Coke in Denmark, no controversy bubbled up.

Accidentally deleted a comment from Anonymous. Here it is:

And yet most agency website photos look as white as Denmark.