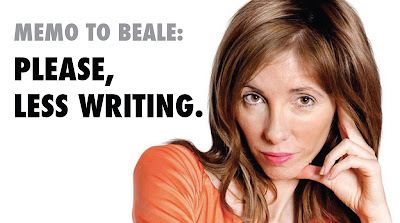 The industry needs to keep the heat up on diversity, keep it boiling and spitting until we always notice when there’s a lack of it, says Claire Beale.

Here’s a thing. Any idea what the following people have in common: Alex Lubar at McCann, Leo Rayman at Grey, Jon Sharpe at Rainey Kelly Campbell Roalfe/Y&R, Xavier Rees at Havas London, Charlie Rudd at Ogilvy & Mather, Gareth Collins at Fallon and Bill Scott at Droga5?

They’re all running some of London’s biggest advertising agency brands. They all took up their roles within the last year-ish. They have all stepped up to be agency chief executives for the first time.

And they’re all men.

But wait. If you’re generous enough to include the interesting but (in ad agency terms) tiny Sunshine in the mix, we can add the brilliant Mel Exon to that list of new CEOs. Jesus, let’s do it: let’s put little Sunshine alongside the big agency beasts because, heck, they hired a smart woman and she certainly deserves to stand alongside the others (and once she gets going, I’m betting Sunshine won’t be quite so little).

Then, last week, Proximity promoted Gabrielle Ludzker to CEO. So it’s not an all-male line-up after all, then. Phew. But, God, it’s still a shameful picture.

Now, I’ll be honest, we almost didn’t notice. Isn’t it interesting, we thought, that so many new agency chiefs have been minted in such a short space of time; it’s quite a moment for the industry, let’s start planning a feature on this new wave of industry leaders. And — embarrassingly — it wasn’t until we began to gather our list of the new agency chiefs that we properly realised there was only one woman among them. We just hadn’t spotted it before because we weren’t looking for it.

That’s the problem with diversity — you need to keep looking. Which is why we need to keep the heat up high on the Kevin Roberts saga, keep it boiling and spitting until we always notice when there’s a lack of diversity and always question why and always push for positive change.

So I make no apologies for the inclusion of yet more coverage of Roberts’ dangerous and offensive comments in this week’s issue. For a moment, we wondered whether the world has had enough of Roberts and his ridiculous remarks. After all, it’s a story that has been played out in full in the national media, generating meaty headlines and superficial commentary. But talking and writing about it — and who hasn’t jumped in to add a few easy words of condemnation? — doesn’t change a damn thing.

The danger is that, the more we talk about it, we think things are properly changing, improving. Yet when you stop and think about the fact that the ad industry has just appointed a whole new generation of leaders with barely a woman among them, it’s clear how very far we still have to go. A massive opportunity to rebalance has just been collectively missed. Shame on us.