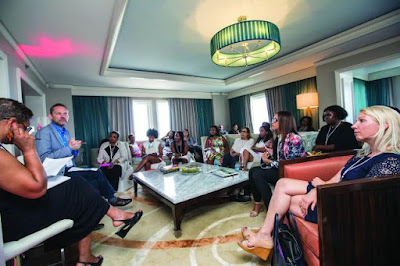 “You see the conference and you’re like, ‘Wow, I didn’t think there were that many people of color working in the industry.’”

That’s Lauren Wesley Wilson, describing the scene in Miami at this year’s ColorComm Conference, which is the outgrowth of a series of networking lunches she started for women of color in communications.

The first lunch, five years ago, had 34 attendees. ColorComm currently has 600 members across six city chapters—New York, Chicago, Atlanta, Los Angeles, San Francisco and Washington, D.C.—but Ms. Wilson is looking to raise that number to 1,000 by the end of the year and to eventually expand to 10 cities.

The organization’s most recent annual conference, its third, had nearly 400 attendees and speakers and featured industry heavy hitters such as Arianna Huffington, Girls’ Lounge Founder Shelley Zalis and Philip Thomas, chief executive, Cannes Lions International Festival of Creativity. And while Ms. Wilson wants the conference to continue to grow in popularity, she doesn’t want to up the number of attendees too much out of fear that it’ll become like other conferences that are “not created to meet people, but are created to listen to content.”

During New York’s Advertising Week in September, Ms. Wilson plans to launch DivergeNow.com, a site dedicated to multicultural campaigns and people working in the industry or those who are champions of diversity.

“We talk about diversity all day long and it’s woven through general trades and there are diversity publications and trade publications, but there’s not one platform that speaks to the multicultural work and industry we’re in,” she said. ColorComm Inc. will own the site, but it will be a standalone business with a team of writers, editors and content creators.

And though a little further off—it’s part of her three-year plan—Ms. Wilson said she hopes to create a community just for multicultural men. When she first brought up the idea, men told her there are not enough of them to fill an organization, but she said she thought the same at the first ColorComm luncheon.

Despite its growth, ColorComm has networking at heart. And that goes for the conference, too.

Ms. Wilson said she was sick of conferences where speakers flee the stage immediately after their sessions and can’t be found after or say they don’t have business cards on them.

“What I love about the conference is that it’s purposely put together to be smaller and have an intimate environment,” said Aixa Velez, director of global internal communications at Cushman & Wakefield and executive director ColorComm’s Chicago chapter. “You have no idea at a dinner that someone next to you can be an executive VP of communications for a Fortune 500 company, because they’re enjoying the conference and participating just like you are.”

At the most recent conference, two of the college students volunteering were approached by agencies and companies and wound up getting internships—one at Edelman in Chicago and the other for the NBC page program.

Lisa Ross, managing director of APCO Worldwide’s Washington office, who joined ColorComm this year, launched an agency task force during her speech at the conference. “I threw away my script and said, ‘We have a problem and we have to address it,’” said Ms. Ross.

The task force will focus on the barriers that prevent women, particularly those of color, from advancing on the account side of communications firms. So far, Ms. Ross said she has met with Barri Rafferty, worldwide president of Ketchum, about the initiative, and she has a series of conversations lined up with other agencies.

Ms. Ross said the conference, which offered a “comfortable, safe place to converse, share concerns, talk best practices and exchange business cards,” was not made up of only female attendees. “I expected to see men there and I wanted to see men there,” she said. “This isn’t an ‘us against them’ proposition. When you’re inclusive, you become diverse.”

“Profound” is the word Mr. Thomas of the Cannes Lions used to describe his experience at the conference. “On a personal level, as a white male in media, it was a life-changing opportunity to experience, to a small degree and for a brief moment, what minorities in the communications industry face every day,” he said. “Our industry is at a critical point and we must face the diversity issue and actively address the extensive and far-reaching challenges it evokes.”