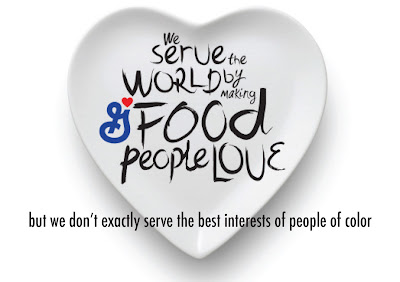 Advertising Age reported the General Mills account review for its U.S. creative and content work isn’t closed after all. Plus, the competition includes diversity requirements, whereby contenders must have creative departments employing at least 50% females and 20% people of color. If the review is truly open, the competing agencies should be required to publicly share the specific inclusion figures. Ad Age identified one competitor as Deutsch, a White advertising agency that deserves to be immediately nixed based on its dearth of diversity and dearth of diversity director. Another contender—Mother—ought to be eliminated just for having produced the infamous Mary J. Blige Burger King bullshit. Oddly enough, incumbent Saatchi & Saatchi won’t participate, despite recently replacing two White male leaders with non-Whites—and one of the replacements is a woman! Finally, Gracie and Raphaëlle should be allowed to make the final selection.

Unexpected Shops Are in Contention; Contestants Must Meet Diversity Requirement

General Mills’ U.S. creative review isn’t closed as previously believed—in fact, the marketer is proceeding with some shops not currently on its roster, including Deutsch and Mother.

The other agencies going through to the second round are incumbents 72andsunny, McCann and, rather than Saatchi, a holding company solution from Publicis Groupe.

In another rather unusual twist, General Mills is requiring that participating agencies are staffed with at least 50% women and 20% people of color within the creative department.

In an interview with Ad Age, General Mills Chief Marketing Officer Ann Simonds, who is running the review with Chief Creative Officer Michael Fanuele, described the review as part of a “reengineering, a reassessment of our company and our marketing in particular,” following the company’s adoption of a purpose statement in June 2015 to “serve the world by making food people love.”

The food marketer last year consolidated its media with Mindshare and Ms. Simonds said the current review is intended to insure that “our creative excellence is as robust, modern and relevant” as it can be.

The goal is “one core agency to handle the bulk [of the work] but to supplement with other partners, which might be technology platforms or media partners,” said Mr. Fanuele, or “an anchor agency supplemented with a roster of interesting partners.”

Ms. Simonds said the review was prompted by a desire on General Mills’ part to zero-base its thinking on marketing. “In any relationship, there is an opportunity to rejigger and represent who we are and how we work some of our incumbents moving forward, but going forward with a commitment to reinventing the relationship as we are [doing],” she said. Ms. Simonds said that over time “a laziness can happen” in which companies and agencies can “incrementalize the small decisions” or do the same thing every quarter as opposed to making material differences in marketing. “Over time, things just get bolted in,” she said.

“I do not find joy in change for change’s sake,” noted Ms. Simonds.

Ms. Simonds and Mr. Fanuele met with the shops in contention for what it called a “creative salon,” a 90-minute meeting which was part chemistry check. The finalists, informed this week, are taking different approaches to the process. When asked why Publicis is offering a holding company solution and McCann is not pitching as IPG, Mr. Fanuele said that could still happen. “The clay is still wet on the proposal,” he said.

“There has been so much talk about agencies being broken and old fashioned, and we as a company remain deep believers in the power of teams with creative thinking to transform a business,” said Mr. Fanuele.

He said that General Mills isn’t necessarily asking for a holding company solution. “This an exercise in finding the right partners, not the right model.”

The next step for shops in the review, conducted by Joanne Davis Consulting, will be workshops over the next five weeks “to get a deeper sense of culture and beliefs for a couple of brands,” said Mr. Fanuele. There will also be a meeting with Mindshare.

He said the company hopes to have a “new partner before we have a new president.”

Ms. Simonds said that while “cost considerations have a role” in the review, they “did not spur it.” The purpose is to make the “right investments and the most important calls,” she said.

As for the diversity requirement, Ms. Simonds said, “we are very excited about that. If you are going to put people you serve first, the most important thing is to live up to it and make it a key criteria.” Mr. Fanuele said the company also made sure to specify that there is diversity not just in the agency but within its creative department. “Agencies are fairly diverse in account and strategic planning, but not with the people who are making the work,” he said.

“It feels like a first” in the industry, Ms. Simonds said. “I think it’s rare and it is important.”

It's only bullshit if General Mills doesn't recognize what goes on at agencies when they're called out on minority hiring issues.

They trot out every foreign H- or 0- level visa holder they've hired from a parent holding company's agency in (take your pick) India, Egypt, England (BAME), Mexico, Brazil, Argentina, Spain, Costa Rica, Taiwan, whatever, and congratulate themselves for their diversity success.

Hiring a Creative Director whose dad owns an agency in own of those countries or a junior copywriter from the richest family in SE Asia is part of the problem, not the solution.

You're still locking out POC wholesale in the U.S. industry, and AA men and women will always draw the short straw and get picked last when they're up against foreign hires.