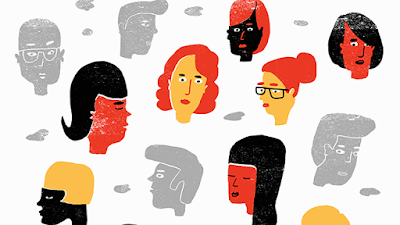 Adweek published a patronizing pile of poop in praise of dubious diverted diversity advocates—namely, Nancy Vonk, Nancy Hill and Cindy Gallop. Has Vonk accomplished anything in the name of actual diversity since spanking Neil French in 2005? Hell, did that online event even draw any results for the global cause? Nancy Hill tried to push change. But the leader of a trade organization can only do so much—which ultimately translates to not much. Plus, despite imploring White honchos to assume the role of Chief Diversity Officer for their respective organizations, Hill wound up hiring 4As EVP of Diversity & Inclusion Strategy and Talent Development Singleton Beato—whose previous employer was the wondrously diverse JWT. Meanwhile, Cindy Gallop—who appears to be a sex addict now fighting for the fairer (and fair-skinned) sex—condemned “a rot at the top of the industry spreading and still spreading in the most appalling way.” Yet what diversity achievements did Gallop create while she was among the rotten top at BBH? Sorry, but if The Three Stoogettes are diversity advocates, look forward to many more decades of declining representation for the truly underrepresented.

Are Agencies Finally Ready to Confront the ‘Rot at the Top of the Industry’?

There is “a rot at the top of the industry spreading and still spreading in the most appalling way, and that is what needs to be stopped in its tracks,” says diversity advocate Cindy Gallop.

Their comments come not after the ouster of one major agency executive, but after the high-profile firings or resignations of no less than four top execs in 2016: Campbell-Ewald’s Jim Palmer, JWT’s Gustavo Martinez, RAPP U.S.’ Alexei Orlov and, most recently, Saatchi & Saatchi’s Kevin Roberts.

Roberts’ resignation amid backlash over his dismissive comments about gender balance seems to be, for many in the industry, a tipping point that is forcing the industry to confront its homogeneity and stubbornly enduring chauvinism.

So is the agency world truly ready to confront its own demons rather than dismissing each ham-tongued CEO’s firing as an “isolated incident”?

Dragging the debate into the light

“I do believe I’ve seen that there has been a more concerted effort to root out all of the cancer and root it out faster, but it’s going to take a while,” said Hill, who as president of the 4A’s represents the interests of agencies across America. “The dominant gender and skin color has been white male for the bulk of this industry’s history.”

There is also, diversity advocates believe, a benefit to having high-profile agency PR disasters like Saatchi chairman Kevin Roberts recently declaring that the gender debate is “over” and saying women are often more content with lower-ranking roles because they lack the “vertical ambition” of men.

This kind of incident sparks global debate and “makes it impossible to ignore that the industry has a huge diversity problem,” says Vonk, who runs Toronto creative leadership consultancy Swim and previously served as creative chief for Ogilvy Toronto.

But even if the industry agrees that it has a problem, what can agencies do in the short term to address it?

How conversation may stave off crisis

If agencies can begin having candid, self-aware discussions about race and gender, it could prevent a disastrous moment of cringeworthy leadership.

Media training on the topic is, while not a solution to the core problem, at least one way of helping executives think more carefully about how they phrase their opinions in public and with their staff.

One female agency executive, who asked to remain anonymous, said she believes Saatchi’s Roberts was largely pilloried because of how he phrased his comments (such as saying “the fucking debate is all over” when asked about gender balance), when he could have found a more reasoned way of explaining how agencies can rethink the way they help female employees with career advancement.

“I feel bad for Kevin,” she said. “One of the main reasons I don’t like to talk about it is that there’s such a good chance that your words will be misconstrued.”

In the end, she said, Saatchi’s parent company had little choice but to disown Roberts, given the industry’s ongoing reputation for insensitivity toward diversity issues.

“He could be a scapegoat, but Publicis can’t afford to piss off so many clients and employees,” the executive said. “What did JWT gain from backing Gustavo Martinez initially? Not a whole lot.”

Media training or sensitivity training won’t solve everything, though.

To Vonk and diversity watchdog Cindy Gallop, Roberts’ ouster was less about poor phrasing than about a clear example of gender bias. The best solution, they argue, is to continue building more diverse leadership teams.

“Kevin Roberts’ belief that women don’t have ‘vertical ambition’ is about ignorance, willful blindness and yes, gender bias,” Vonk said. “And he’s not unique—it’s a view among many older white men at the top who aren’t keeping up the tour. These leaders will keep putting people that look like themselves into top jobs because that’s their comfort level.”

One of the agency world’s best-known female leaders, 360i CEO Sarah Hofstetter, agrees:

”The issue is, what’s going on inside your four walls?” Hofstetter says. “Are we acknowledging what needs to change in the culture of these agencies to attract people of different backgrounds in terms of gender, race and sexual orientation?”

At older shops, legacy can be a liability

For her own agency, Hofstetter said the organization benefits from not being a larger legacy shop, where it seems many of the recent problems have stemmed from. That’s not to say that sexism and racism is absent from other agencies, but “it’s easier when you’re building from scratch rather than inheriting a decades-old infrastructure,” she says. “Wallpaper is the go-to solution: It’s quick and it won’t ruffle any feathers on top. But we were founded as a pure meritocracy.”

What about those larger shops? How are they answering these problems and working to rid itself of the “rot,” as Gallop puts it?

Some larger organizations have found success starting from the top and working down. For IPG, that means a diverse board. Heide Gardner, chief diversity and inclusion officer at IPG, noted “40 percent of our board members are women.” With diverse leadership, many execs argue, comes diverse thought and diverse work for clients.

Until there is a balance of all kinds, from gender to ethnicity to sexual orientation at the uppermost levels of these organizations, change is going to be an uphill battle, says 4A’s leader Nancy Hill.

“As I said in March [at the 4A’s Transformation conference] … this has to start at the top and the CEO of any agency needs to consider himself or herself the chief diversity officer. It’s their job. Nobody else’s.”

At the agency level, Gardner noted that some IPG agencies have started “conducting unconscious bias training,” while others “are implementing a blind resume practice in which they eliminate any gender identifiers from resumes” to ensure fairer hiring practices.

After a lengthy career of watching misogyny and other forms of discrimination manifest themselves in the agency world, Vonk says she’s optimistic that change will come—but knows it won’t come easily.

“I was glad to see Publicis respond immediately and decisively, but not many leaders with gender bias announce it to the press. It’s not always easy for a holding company to identify people who are doing active damage to their employees and employers,” Vonk says.

“There’s hard work to be done. When those who reject diversity exit roles of great influence and are replaced with forward thinking leaders, we’ll get somewhere.”