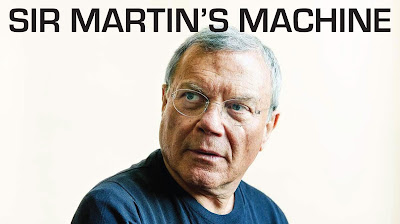 Wanted to elaborate on the Harvard Business Review navel-gazing by WPP Overlord Sir Martin Sorrell, as it serves as a classic case study on corporate cultural cluelessness in the advertising industry.

The title of Sorrell’s self-absorption—WPP’s CEO on Turning a Portfolio of Companies Into a Growth Machine—is extraordinarily accurate and appropriate. That is, WPP is a machine, and machines do not naturally incorporate the emotional components necessary for concepts like diversity. Hell, it could also be argued that Sorrell is closer to being a machine than a man.

The tale opened with Sorrell bowing to bankers over the company’s financial crisis. From the beginning, profit and revenue trumped people and resources. It was all about acquisitions in terms of companies versus communities, real estate versus real people. The glorified accountant devised a solution to create solvency, not serenity.

Give Sorrell credit for his financial success. But recognize that the man built a machine, and the beings within the machine are cogs. For starters, the overall acquisition scheme perpetuated sameness; that is, when you buy one White advertising agency after another, the end result is one White holding company. And when Sorrell discussed talent investment, he was only talking about cog collecting. As such, it made little sense for him to consider the uniqueness of the cogs; rather, it was just necessary to replace and replenish the cogs by acquiring them as efficiently as possible. In short, WPP drew—and continues to draw—from a White supplier program. And if the current cogs keep the machine running, there’s no need to change the system.

Yes, Sorrell announced that he’s also adding White female cogs to the mix, but it’s still a limited and exclusive supply chain. There is no demand to introduce diverse cogs. In fact, the existing machine might reject such an infusion. Ironically, WPP has produced and received praise for notable advertising that is pro-White women.

Compare the faux advocacy to advertising shat out for diversity, and the company’s priorities become clear.

Sorrell has openly acknowledged the dearth of diversity within his machine. Unfortunately, he hasn’t identified a financial or business need to alter the cogs. So, despite the public hand-wringing gestures, there is no imperative to actually act on the matter.

For now, until the bankers—or revenue-providing clients—demand that Sorrell rejigger the cogs, diversity will remain a dream deferred, delegated, diverted and denied. And WPP will fittingly remain an acronym for Wire and Plastic Products.

Addendum: Shortly after this post was written, WPP announced that former JWT Worldwide Chairman and CEO Gustavo Martinez is still working for the enterprise, despite having resigned in response to a court case featuring accusations of sexual harassment, racism and other assorted bad behavior. This disturbing disclosure underscores that WPP is indeed a machine. Even if Martinez is found completely innocent of the charges against him, couldn’t the White holding company have waited for a rendered verdict before seeking to gain revenue by rehiring the defendant? Reinserting a cog accused of harassing women—while jumping on the White women bandwagon—sends contradictory messages. Which is a polite way of saying that Sir Martin Sorrell is a fucking hypocrite.