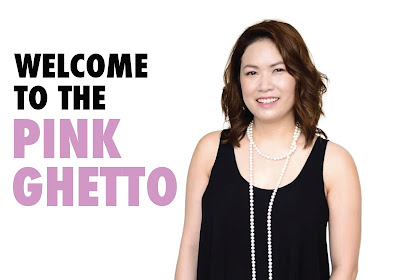 Okay, it might be helpful to first review a few standard dictionary entries for “ghetto”:

1. a section of a city, especially a thickly populated slum area, inhabited predominantly by members of an ethnic or other minority group, often as a result of social or economic restrictions, pressures, or hardships.

2. any mode of living, working, etc., that results from stereotyping or biased treatment: job ghettos for women; ghettos for the elderly.

Not sure about the unique cultural conditions in China, but “ghetto” arguably isn’t an appropriate term for the situations in the U.S. and U.K.—especially for White women.

After all, White women in the typical White advertising agency are not exactly segregated into a lesser mode of living or working. In fact, while they may be underrepresented at upper levels, they are quite present and visible throughout any company—even representing the majority, from a pure numbers standpoint. They are literally sharing the same physical space and cubicles as their White male counterparts.

Contrast the oh-so-awful plight of White women to the realities experienced by minorities in the field and it’s no cultural contest. It’s not necessary to have the Reverend Jesse Jackson declare that people of the non-Caucasian persuasion face ghettoization as if they’re on a plantation. Blacks and Latinos are routinely relegated to the stereotypical subservient roles of reception, security, janitorial maintenance, administrative assistant, mailroom or Chief Diversity Officer. Minorities are steered towards “ghettos” such as the Negro Leagues-like multicultural marketing silos, where they are paid crumbs versus coins. Finally, while White women continue to dramatically advance far beyond the never accurate 3%, minority representation is actually declining.

Sorry, but the “pink ghetto” is Disneyland compared to the true ghettos on Madison Avenue and beyond.

Battling the pink ghetto: Perspective from a ‘Woman to Watch’

Jeanette Phang, one of the 2016 Women to Watch, reflects on her evolving view of gender inequality and what to do about it.

Last week I was named one of Campaign APAC’s Women to Watch. It made me reflect on my experience as a working woman: the challenges I face, the impact—if any—I am making, and if and why these lists are still necessary.

A few years ago, I was asked to participate in a female mentorship group. I declined. For many reasons but mostly, I was preoccupied with doing other things: managing a team, championing a data-driven approach in my agency, being actively involved in the management team. I had no time for distractions from the real challenges in my workplace. My nonchalance grew from the roots of my experience. I had the privilege of working in agencies where being female was a non-issue, where my competency determined my successes; not despite of or because of my gender. Glass ceiling? What glass ceiling?

I still feel very much like this, but my blasé feeling has been tempered. Part of my reluctance to belong in women-only networking circles or go to all-female conferences are the boundaries. Why limit myself to female mentors only? Or to only meeting with women in the industry when I could meet with the best and the brightest in advertising? I don’t want to be cordoned into the ‘pink ghetto’ or have any of my career successes be couched in gender terms (see: Marissa Mayer). But, and here is the big ‘but’, my myopia towards gender issues in the workplace made me blind to the sexism that was occurring around me.

Here are things that happen to women regularly in the workplace:

• Having questions directed to your male colleagues by clients despite being project lead.

• Being asked to clean up a meeting room although your peers and subordinates are equally available to do so.

• Being asked to take notes in a meeting despite the presence of more capable/available men.

• Getting cut out of conversations for “boys”.

Reveal: when I said women in the workplace, I meant me. These things were and are easy to dismiss. Small-minded people do small minded things. Competency trumps ignorance. These were things I rallied behind. The thing was—I already proved I deserved a seat at the table…why then was I tasked to clean it?

Moments like these bring to light the systematic sexism that pervades our institutions. Ignoring these incidents distracts us from making our societies and companies weaker. There is substantial proof that diversity makes for better ideas, products, teams and even futures. Silencing women by mansplaining, subtly reducing our positions or removing us from conversations diminishes everyone.

I certainly don’t claim to have the answers, but here’s what I have learned in my past decade of being a female in the workplace.

Don’t subsume your femininity to grow

I am unabashedly female in many aspects. I refuse to tamp down the traditionally viewed feminine skills at work to move up the proverbial career ladder. Part of ensuring organisations become diverse is acknowledging there isn’t only one way to be a leader. We worship at charismatic, extroverted, aggressive, show-no-weakness leadership altars far too often. To change this, we have to be the leaders that we are and not a facsimile of what we believe leaders are meant to be.

Roll with being called bossy

I have zero issues being called bossy. This is not to say I will not collaborate, or that I am difficult. If I exude attributes that are boss-like, well, it is because I am the boss.

It is a delicate balance to know when a challenging situation is due to your gender or due to your behaviour. I remember a colleague who ranted to me about her review with her male manager. She took no responsibility for any of the issues that were brought up, attributing everything to discrimination. Her lack of introspection and inability to acknowledge valid feedback about her performance hampered her growth.

Conversely, it is equally important to look at the larger picture and see if there is endemic discrimination where you work. Figure out what your male counterparts are earning. Track career paths of your peers. Perhaps, you will find out the global executive chairman of your organisation believes diversity is no longer an issue. It then is a matter of whether to move on or to fix the problem from within.

Men: Step up and speak out

There is no need to bring up the trope of evil existing only because good men do nothing (but whoomp, there it is.) Men, I implore you, speak up for your colleagues. The next time you see someone ask your female colleague to do something that diminishes her because of her gender do something. Don’t look away. Don’t ignore it. Volunteer to clean up the room and show it is not a gendered role. Point out that she should not have to take notes merely because she is the only female in the meeting room. Your voice matters because it demonstrates that equality and diversity are issues for everyone. We do not need knights in shining armour to save us, but we need friends, colleagues and managers that are willing to stand up and say sexist behaviour is unacceptable.

Every all male panel, marketing syllabus, and management team is a clear marker that the diversity conversation is not over. For now, we must continue to shine a beacon on how female leadership is transforming our industry. My duty, and yours, is to build a future where accolades like these need not exist.

Jeanette Phang is director of business intelligence at OMD China. She originally posted this column on LinkedIn.

“At any rate, if the glass ceiling can be shattered for women, more diverse ethnicity is bound to be next. Good times.”

Ah, well good then. Finally white women are admitting in public, out loud, what we always suspected.

I'm trying not to let this get under my skin because it's an Asian publication and I can't expect them to get the weight of the word in the United States.

But it still gets under my skin, that anyone would possibly think in 2016 that there's a bigger issue of gender than race in the ad industry.

You can walk into any agency anywhere on the planet and, with a few exceptions, there will be anywhere from "some" to "quite a few" to "a lot" of women.

You can walk into any agency in America, the UK, hell even South Africa, and you will FREQUENTLY not see a black or brown face unless they are working a security or cleaning crew position. If there IS someone ethnic, it's more statistically likely that they're on a foreign visa than that they're a local minority.

So this gets under my skin after all.