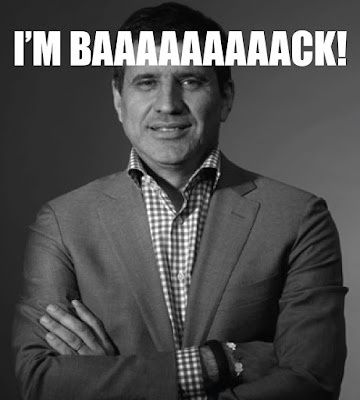 Campaign reported former JWT Worldwide Chairman and CEO Gustavo Martinez has been working on projects for WPP and is slated to lead a unit dedicated to serving the Nestlé account. While the specifics are speculations, WPP did acknowledge, “Gustavo Martinez and his family have left the United States and moved back to Barcelona. Pending the result of the court case he is working on projects in Spain and Latin America. Erin Johnson continues to be employed at J. Walter Thompson.” Um, didn’t Martinez resign four months ago? Regarding the Nestlé rumor, perhaps someone misheard something Martinez said, as his accent and lack of command of the English language allegedly lead to confusion and misinterpretation. Maybe he was insisting that he loves chocolate people, just as Donald Trump once declared he’s got a great relationship with the Blacks. Look for WPP to also announce the rehiring of Neil French, as well as the recruitment of Jim Palmer and Kevin Roberts. Oh, and Sir Martin Sorrell is a fucking hypocrite.

There is no failure among ad bros.

Gustavo will continue to get a paycheck and opportunities that no one black or brown, or women, or black or brown women, would ever be afforded before OR after such a public escapade.

He's been promoted and protected his entire professional life because he's a part of an elite white bro-hood. Don't let the Hispanic surname mislead you, this is still a white bro raised in white European and South American circles.

Nothing caught on camera or brought up in court is going to lead to the ad industry's holding company overlords siding with a woman (or minority, or anyone without a thick bank account and global contacts) over this guy.