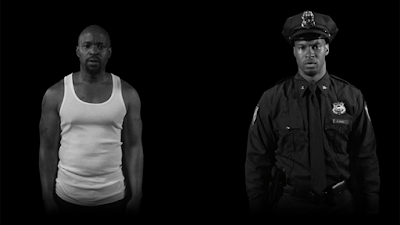 RushCard pushes the boundaries of tech and tolerance

With the flip of a phone, a mobile video debuting today challenges viewers on how quickly we judge strangers not just by the color of their skin but by the context of their clothing.

The video begins with a black man in a white tank top standing in front of a black backdrop. He speaks straight into the camera, candidly but earnestly.

“This morning before I hit the door to leave the house, my spouse stopped me and told me to please be careful,” he says. “Lately she’s been extra prayerful that I make it through the day. She know how these streets play, and she say because of the way I’m dress makes me target for public disdain.”

But when watching it on a smartphone, flipping the video from vertical to horizontal at any moment tells a different story. In its place is the same man, wearing a full police uniform speaking the same words. Regardless of what he’s wearing, the monologue continues.

“And my kids stomach this pain too because the TV entertains you with story after story of how men who look like me don’t make it home, may even have to listen through the lens of somebody’s mobile phone, all because my life is prone to strike this tone of fear because somehow I appear to be your enemy, your adversary, or too aggressively dangerous or scary that you find it necessary to take my breath away.”

The video—along with a second featuring a different person in the same clothing reciting a different monologue—is the first in a series sponsored by RushCard, the pre-paid credit card company founded by hip hop mogul Russell Simmons. The series, titled Making Moves, is part of a larger ad campaign rolling out this month. The campaign was created by Narrative, an agency also founded by Simmons. (The videos only work on mobile devices.)

According to Narrative CEO Tricia Clarke-Stone, the video is meant to create a discussion around the issues of racial profiling and violence that has swept the nation over the past two years. Future films will address issues faced by other minority groups, such as those who identify as gay, lesbian or transgender. However, she said RushCard noticed that its core customer base has been concerned with growing tensions in some areas between civilians and police officers.

“If you think about it, you can’t make moves if you’re inhibited by judgment, stereotypes and a lack of openness,” Clarke-Stone said.

Working with Narrative, the company wanted to lean into art and poetry as a means of addressing the subject in a way that was “really riveting and highly charged.” So they worked with Gillian Laub, an acclaimed filmmaker and photographer who’s spent her career documenting issues of race.

Clarke-Stone pointed out that people viewing a video on a smartphone usually start off vertically before turning from portrait to landscape to see a clearer picture.

“We said maybe this could work to show an actual shift in perspective,” she said.

To pull off the tech that allows for a seamless transition, Narrative’s engineers built a framework that leverages video tags and HTML canvas that allow for swapping between two videos based on the device orientation. Because this is usually easier for Android devices than for iPhones, Clarke-Stone said Narrative’s engineering team rendered the video through HTML5 canvas but then allowed for two videos in a queue that would bring up each video right at the point when someone flips the phone. They then had to figure out the weighing of phones, along with working with cellular providers to understand how the video would be served to each phone so that it wouldn’t be too large of a file. The videos, shot on an iPhone, were meant to capture the rawness of the spoken word.

Addressing race is a sensitive topic. So what made RushCard feel it had the authority to discuss it in an ad campaign? Narrative and RushCard wanted to drive conversation rather than to ignore an issue that’s important to its target market.

“My hope is that these videos will be a starting point for a nuanced discussion about issues that affect our community and the entire country,” Simmons said in a statement to Adweek. “I believe in the power of art to create change, and these films use art and technology to actually show that change taking place.”