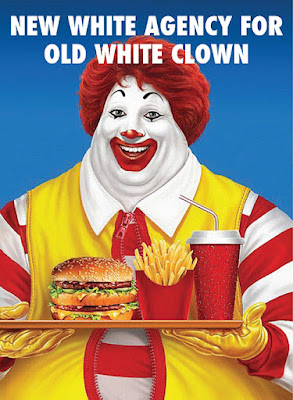 Advertising Age reported Mickey D’s fast-fed its U.S. creative business to Omnicom, and the White holding company has created a “new agency of the future” to exclusively handle the account. The mysteriously wondrous enterprise will be run by Wendy Clark. Looking forward to seeing how the McAgency is staffed, given Clark’s restless commitment to diverted diversity and faux dedication to true diversity, as well as her focus on recruiting and retaining top talent. “Omnicom has built a new agency of the future for us,” gushed McDonald’s U.S. Chief Marketing Officer Deborah Wahl. “This agency of the future really has digital and data at the heart, which allows us to be customer obsessed at a whole new level in everything that we do.” Wow, somebody’s drinking the McKool-Aid. Did Omnicom have to erect an “agency of the future” because its current clan of White advertising agencies is stuck in the past? And will the digital and data include diversity? Finally, it could be bad news for Burrell—the Black advertising agency under the Publicis Groupe umbrella—who has serviced Ronald McDonald and his crew for decades. Will Burrell keep the Golden Arches or get a golden shower?

Did somebody say Omnicom?

After a hard-fought four-month review, McDonald’s has chosen Omnicom Group over Publicis Groupe to handle its U.S. creative account. The Omnicom pitch for the country’s largest fast-feeder was led by DDB North America CEO Wendy Clark, who will have oversight over a new, as yet unnamed agency dedicated exclusively to McDonald’s.

“Omnicom has built a new agency of the future for us,” said McDonald’s U.S. Chief Marketing Officer Deborah Wahl in an interview with Ad Age. “This agency of the future really has digital and data at the heart, which allows us to be customer obsessed at a whole new level in everything that we do.”

Ms. Wahl said that beginning Jan. 1, 2017, McDonald’s work will be handled solely by the new Omnicom operation, which will be based in Chicago. McDonald’s plans to move its headquarters from suburban Oak Brook, Ill., back to Chicago by early 2018. It was not immediately clear who would lead the team itself. Ms. Clark will have oversight of the agency, McDonald’s said.

The decision, which ends one of the most closely watched reviews in recent years, means that Publicis’ Leo Burnett Co., which has worked with McDonald’s for 35 years, will no longer be on the U.S. roster. However, Publicis will still have some business for the fast-feeder outside the country.

“Publicis as a whole has been a great partner and we continue to value the relationship,” Ms. Wahl said.

The review began in late April and included Omnicom Group, Publicis Groupe and WPP, which dropped out of the process this spring.

When WPP dropped out of the race for the McDonald’s account, some suggested it was because the chain was asking the companies to work at cost. “That was not from us at all,” Ms. Wahl said. “It wasn’t about a cost exercise or not paying anything to the agency. The purpose is to look, again, in this new world where the level of storytelling and creative is so exponential, how do you do that in a way that makes sense and that you can afford to do.”

Still, McDonald’s is “adding a pay-for-performance aspect to it,” Ms. Wahl said, based on metrics that will be a mutually agreed upon mix of more classic marketing metrics and brand health, along with items such as restaurant sales and traffic, or the number of visits. She declined to be more specific.

For McDonald’s, a key factor in its choice was this new agency model, which Ms. Wahl said should enable the brand to be faster and more flexible and allow the agency to handle an increasing number of assignments.

“It’s poised to deliver the caliber and certainly the volume of storytelling that’s needed to support our business today which, frankly, has increased exponentially and we think that trend is going to continue,” Ms. Wahl said. She stressed that digital and data will be at the core of the new agency and should help the massive brand personalize its consumer engagement.

McDonald’s was the 28th largest advertiser in the United States in 2015, spending $1.43 billion, according to the Ad Age Datacenter.

The review only covered the U.S. creative account. Omnicom Media Group’s OMD Worldwide, McDonald’s existing media agency, was not involved in the pitch at all in order to keep the process “extremely equitable,” Ms. Wahl said. Neither was DDB’s Alma, which does some of McDonald’s multicultural work.

McDonald’s is the latest big win for Omnicom. Earlier this month, AT&T consolidated its creative, digital and media accounts with the holding company.

The way Ms. Wahl sees it, the dedicated agency model should help eliminate obstacles that can arise when multiple agencies, even agencies within the same holding company, collaborate and have different targets and budgets. “It’s going to be a whole new era of creativity and new models that will be fantastic for the business and the industry overall,” Ms. Wahl said.

Before making its decision, McDonald’s met multiple times with both Omnicom and Publicis. The process included several “chemistry sessions,” as Ms. Wahl described them, including having each holding company choose a location. For that meeting, Omnicom took over a whole floor and showed how it would set up the new agency, giving McDonald’s a sense of how it would look and feel different.

For now, there are no plans to initiate reviews on other aspects of the U.S. business, such as public relations and multicultural work. Also not changing, at least for now, is the “I’m Lovin’ It” tagline, which was not part of the brief or pitch process. “We’ll see where that develops, but for now ‘I’m Lovin’ It’ remains,” Ms. Wahl said.

The agency overhaul comes as McDonald’s makes changes to its food, decor and other aspects of its business and tries to establish deeper connections with its customers through a mobile app and other updates. CEO Steve Easterbrook stepped into his role in March 2015 to help the Golden Arches out of a prolonged sales slump, particularly in its home market. McDonald’s began posting positive sales at longstanding U.S. locations in the third quarter of 2015 after nearly two years of declines.

Good while it lasted said...

Hello "Total Market" under the watchful eye of a white female exec (the ultimate 2016 diversity story).

Nobody black or brown is going to get crumbs. Not even poppy seeds this time around.