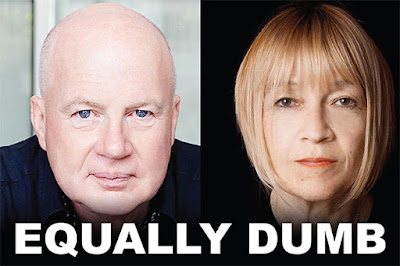 Wanted to offer a few additional thoughts regarding the comedic, compact, culturally clueless conflict between diverted diversity champion Cindy Gallop and soon-to-be-former Saatchi & Saatchi Chairman Kevin Roberts. It all started when a Business Insider interviewer commented about the numerous industry leaders jumping on the White women bandwagon—especially the Tweet-happy Gallop—which prompted Roberts to spit out the following remark:

“I think she’s got problems that are of her own making. I think she’s making up a lot of the stuff to create a profile, and to take applause, and to get on a soap[box].”

The two short sentences ignited an online stir, with Gallop fans rallying to position her as a female provocateur, diversity advocate and cyberbully victim. Gallop initially insisted she wouldn’t dignify Roberts’ opinions with a response. But as it’s a woman’s prerogative to change her mind, she quickly countered by declaring Publicis Groupe should have fired Roberts and replaced him with her—at the chairman’s $4,137,786 salary, of course. Publicis Groupe has not yet responded to Gallop’s goofy offer.

It could be argued that the grandstanding Gallop corroborated Roberts’ remark. That is, she shifted the spotlight from the original diverted diversity discussion to herself. Plus, the Business Insider interview acknowledged that Saatchi & Saatchi “does happen to have a lot of female leaders that act as role models to other women in the business”—so it’s quite probable that Roberts has actually done more to accelerate the White women bandwagon than Gallop. Regardless, lost in the childish squabbling was another remark from Roberts that has gone virtually ignored:

This is a diverse world, we are in a world where we need, like we’ve never needed before, integration, collaboration, connectivity, and creativity … this will be reflected in the way the Groupe is.

Okey-doke. Unfortunately, the Groupe doesn’t come close to reflecting the existing diverse world. The Supervisory Board features at least two characters who earned their roles through nepotism. And the Audit Committee, Compensation Committee, Appointment Committee, Strategy & Risk Committee, Management Board, Management Board+, P12 Executive Committee and Strategic Leadership Team are predominately comprised of White people—male and female, in case Gallop didn’t bother to notice. Hence, swapping Roberts for Gallop would only mildly improve the biracial mix of the Groupe.

Gallop also whined, “… [C]ontrary to his remarks directed at me, nobody anywhere is paying me anything to do the work I do in this area.” Um, Roberts never stated Gallop was being paid to create a profile, take applause and get on a soap[box]. Chief Diversity Officers aside, no one should receive money to do the right thing. It ought to be an expected responsibility attached to any $4,137,786 salary—or whatever exorbitant compensation Gallop enjoyed while she was officially toiling in the business yet doing nothing noteworthy to promote inclusion.

In the end, Roberts and Gallop succeeded in perpetuating diverted diversity and squelching true diversity. For that, they should both be banished from adland.

I can only judge someone's interest in and commitment to diversity based on what they've done in the past, when no one was watching and no spotlight was on them.

I don't see any women of color, or any men of color, in any notable numbers, coming to thank Cindy Gallop OR Kevin Roberts for what they did for their careers. I don't see a history of hiring changes, allowing more POC through the door, at any of the ad agencies where either of them ever stepped foot. If I look at the "Who We Are" pages of any agencies associated with them today, in 2016, it's a wall of white.

In my eyes, that means the two of them have been equally silent, ineffective, and uninterested in minority issues in advertising.