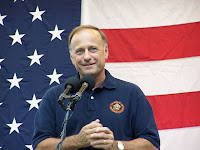 Morons on parade in a MultiCultClassics Monologue…

• Rep. Steve King is not backing down from his statements regarding Barack Obama. “I don’t see that I have made a factual or judgment error. What I see are some people that are super-sensitized and I apparently have touched their nerve,” insisted King. “No one has rebutted my argument, so I have to say I must be right.” It would not be a factual or judgmental error to consider King a moron.

• A Brooklyn bookseller settled a discrimination lawsuit brought by ex-employees who charged he regularly used the N-word, called his warehouse a plantation and targeted White employees with retribution for supporting the charges of the Black workers. The bookseller will pay $180,000, plus donate 1,000 civil rights and Black-themed books to charity. He should also be forced to continuously watch Read A Book.

• A new survey indicated 26 percent of U.S. firms plan to hire next quarter. This is good news for New York Governor Eliot Spitzer.
Posted by HighJive at 9:29 AM