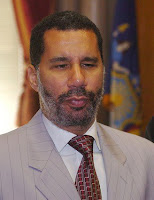 Lt. Gov. David Paterson’s ascension to the governor’s mansion — the first time an African-American will lead New York — was greeted by black leaders yesterday with enthusiasm, pride and joy.

“It is a milestone, and it is historic,” said Rep. Gregory Meeks (D- Far Rockaway). “It looks as though we’re making some headway. Some ceilings are being removed.”

It didn’t happen the way black leaders or Paterson hoped, with the resignation of Eliot Spitzer, whom black voters supported overwhelmingly in 2006.

Nevertheless, Paterson will be only the fourth black governor in United States history. His unexpected promotion comes with the success of presidential candidate Sen. Barack Obama — providing hope, some said, that barriers to political power were being broken down permanently.

“The nation is maturing, overcoming race trauma,” said the Rev. Jesse Jackson. “It indicates a new day of possibilities for the American dream to be realized.”

Paterson remains in rarefied company. He joins Massachusetts Gov. Deval Patrick, a Democrat, as the only sitting black governors. The only black governor of the 20th century was Douglas Wilder, the Virginia Democrat, who served from 1990 to 1994.

It was back in 1872 when the first black governor, Pinckney Benton Stewart Pinchback, a Republican from Louisiana, was sworn into office. He served for 36 days after a sitting governor was impeached and removed from office.

Paterson has blazed a trail in New York politics. He was the first black lieutenant governor and the first African-American to assume a New York legislative leadership post as minority leader in 2002. He is also the first legally blind person to accomplish those feats.

Paterson has championed a number of issues with appeal beyond his base in Harlem, including alternative energy projects and stem cell research. And to Rener Reed, civil rights activists from Lakeview, those issues resonate with black New Yorkers.

“The issues that affect black people affect all people,” Reed said. “We want jobs, we want an education, we want housing. We want just what everyone else wants, nothing different.”

Still, Paterson has been a strong supporter of traditional civil rights issues. As lieutenant governor, he worked to steer more state contracts to minority-owned businesses and in 2002, he helped Nassau’s black leaders in an unsuccessful effort to create a majority-minority state senate district.

“There’s a feeling that David will spend some of his resources and some of his time trying to address some of those issues as governor,” said Nassau Legis. Kevan Abrahams (D-Hempstead), who said many blacks feel a “prideful joy” for Paterson.

But now Paterson must juggle the conflicting desires of many constituencies, Abrahams said. “He’s going to have to address all needs: black, white, brown and yellow.”
Posted by HighJive at 11:17 AM