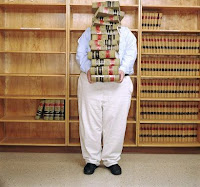 Writing off the week in a MultiCultClassics Monologue…

• Borders Books announced that it might be for sale, while Barnes & Noble experienced a 9 percent drop in 4Q earnings. Borders collected $42.5 million in financing to stay afloat for the rest of the year. An analyst remarked, “It’s a crunch of three C’s: credit, capital and consumer spending.” In Borders’ case, it also involves a few more C’s: crappy customer service.

• Publisher Random House has nixed releasing a book by two ex-concierges at the Four Seasons Hotel in Chicago. Apparently, the authors had signed confidentiality agreements with the hotel, which played a role in the decision to halt publication. The book allegedly offered hot gossip about celebrity guests. For example, actor John Cusack once sent a “dishwasher-size cardboard box” filled with dirty laundry, instructing the hotel to clean, press and deliver everything to his room prior to his arrival. Cusack also left his clothes all over the room, inspiring hotel staff to dub him, “The Underwear Guy.” Wow, that’s some juicy stuff. Somebody speed dial TMZ.

• Starbucks must pay its California baristas over $100 million in back tips and interest that the company had given to shift supervisors—a violation of a state law prohibiting managers and supervisors from sharing tip money. At Starbucks, that sort of money will pay for a few cups of coffee and about three scones.
Posted by HighJive at 11:24 PM

Email ThisBlogThis!Share to TwitterShare to FacebookShare to Pinterest
Labels: mergers and buyouts, starbucks